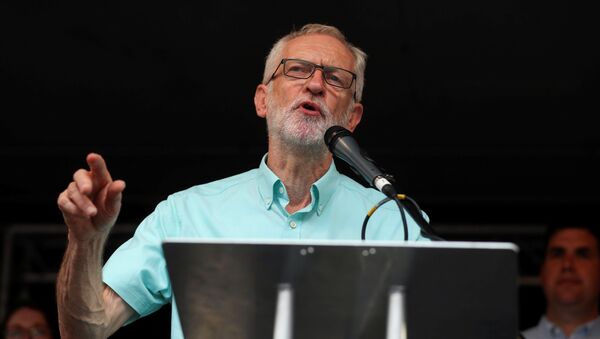 The leader of the Labour Party is preparing to meet other opposition figures to discuss options to prevent a no-deal option if the UK leaves the European Union on 31 October.

Labour Party head Jeremy Corbyn has lashed out at Boris Johnson accusing the UK Prime Minister of "cosying up" to US President Donald Trump.

Writing in the Independent, Corbyn stated that in case of a no-deal Brexit, the UK would end up being at the mercy of the US President Donald Trump.

According to Corbyn, as soon as the UK walks out of the bloc on Halloween with no deal, US corporations will take the opportunity to gain profits at the expense of the UK populace.

"The battle to stop a no-deal Brexit isn't a struggle between those who want to leave the EU and those who want continued membership," Mr Corbyn wrote. "It's a battle of the many against the few, who are hijacking the referendum result to shift even more power and wealth towards those at the top. That's why the Labour Party will do everything necessary to stop a no-deal bankers' Brexit."

The Labour leader underlined that he would take every measure at his disposal to prevent a no-deal outcome. He called on opposition parties to set up a working arrangement that would crumble Boris Johnson's plans.

UK Prime Minister Boris Johnson has repeatedly stressed that he wants the United Kingdom to leave the European Union on October 31 "come what may", although he said he preferred an orderly exit. He has been calling on the European Commission to drop the clause that seeks to avoid a hard Irish border by tying the country to the EU customs union, despite Brussels insistence that they will not reopen negotiations.