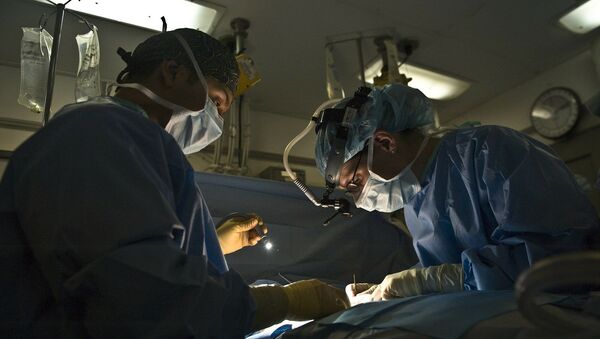 CC0 / /
Subscribe
A carpenter whose left hand was nearly completely sliced off by an electric saw earlier this year has recently begun to regain the use of his hand after surgeons were forced to take drastic measures to grow new tissue to treat the injury.

The horrific saw accident unfolded on May 30 as 46-year-old carpenter Anthony Lelliott was using an electric chop saw to fit floorboards inside a house in the English town of Weybridge. The routine maneuver eventually led to the circular blade slicing through Lelliott’s wrist and across his palm.

Lelliott’s hand, according to medical officials, was essentially left dangling by a small sliver of skin and bone. 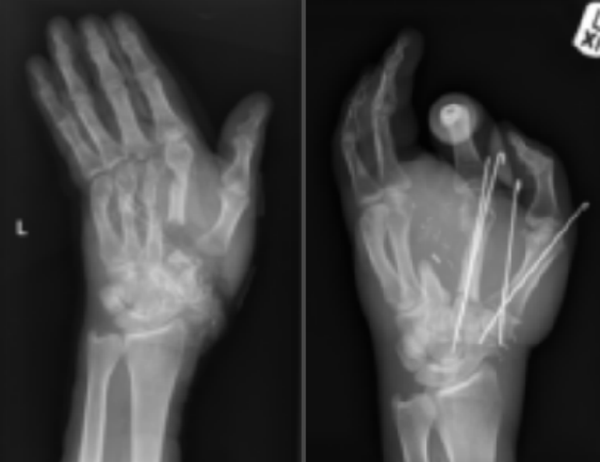 "I threw myself off the saw. I don't know whether it was my brain playing tricks on me, but it was like an out-of-body experience; I could see myself and see what I'd done,” he said in a statement. “There was blood spurting out everywhere."

"All I remember was coming through the doors into [the emergency room] and being greeted by a phenomenal amount of people. I couldn't count them,” he added.

It would take surgeons some 17 hours to repair the damage, which saw the surgical team fixing Lelliott’s broken bones, establishing a good blood and nerve supply to his fingers and finding a way to reconstruct the dying skin missing from his palm.

"We had to join not just tendons and nerves and arteries, but put in grafts for every single piece of tissue that we needed to repair,” Roger Adlard, a consultant plastic surgeon involved in Lelliott’s procedure, told the BBC.

"It had been described as a sub-total hand amputation, which was true. However, it had been cut off almost completely in two places - at the base of his palm and again just below the fingers - resulting in a double-level amputation.”

Warning: Image may be too sensitive for some viewers. 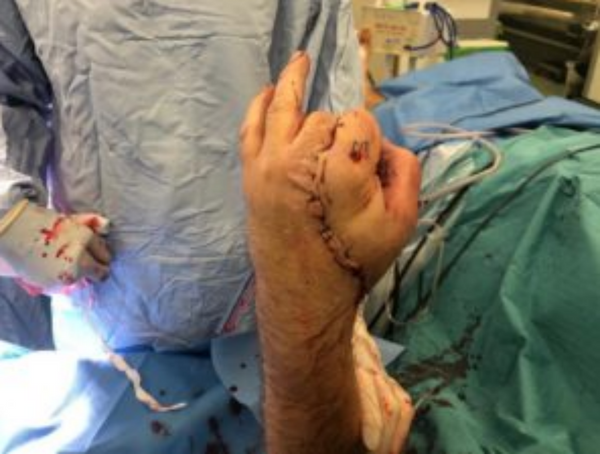 Adlard was aided in the hours-long operation by fellow plastic surgeon Farid Ali, who specializes in microsurgery. The pair, along with several medical officials, worked to remove veins from Lelliott’s foot and nerves from his forearm in order to continue repairing the severely mangled hand.

Lelliott’s first operation lasted through the night, ending at roughly 9 a.m. the following day, The Evening Standard reported. A second surgery was carried out the following week to remove Lelliott’s decomposing middle finger. It was during this same operation that officials decided to cut off a portion of Lelliott’s skin from his groin and “surgically bury” his palm onto the area for a period of two weeks in an effort to help regrow the skin, the BBC reported.

According to the Evening Standard, officials estimate it will be about a year before Lelliott will regain enough strength in his left hand to return to work. With the help of physiotherapy sessions, Lelliott has been able to accomplish a pinch grip.