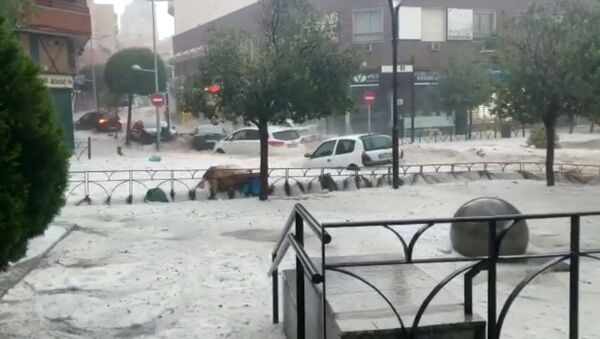 Spain has suffered from a day-long seasonal hailstorm that caused major flooding in Madrid and southeast regions of the country.

Madrid's roads and metro traffic have been disrupted due to massive flooding that transformed streets into rivers, according to local authorities. The storm caused flight delays and flooded tunnels and parking lots.

Social media users have shared video footage of the day, showing cars and dumpsters dragged down the stream in waterlogged streets, and piles of hail, some the size of ping-pong balls, in several areas.

​"No one was hurt and the interventions were relatively minor for a storm of this magnitude: removing branches from roads, floods in garages, basements or commercial premises", a spokesman for the Spanish Emergency Service stated.

​The Spanish Meteorological Agency (AEMET) has stated that it recorded more than 9,000 bolts of lightning in six hours.

​The rains moved on 27 August to the east coast and to the Balearic Islands, in the Mediterranean, the meteorological agency added.

​There are no reports about injured people or the degree of the damage caused yet.