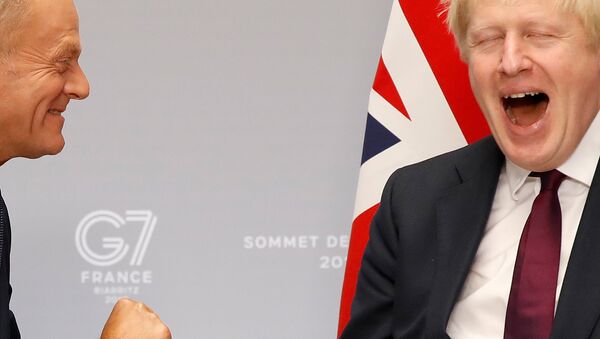 Tommy Sheridan
All materials
Having never lived through a world war and the enormous uncertainties, surprises and instability such events inevitably bring in their wake I would have to suggest the current political situation in the UK is the most uncertain and unstable in my lifetime.

The whole Brexit issue has challenged the hitherto comfortable political hegemony and status quo by pitching certain parts of the privileged elites who make up the British Establishment against each other. Make no mistake about it, being pro or anti-Brexit is not a class question in the sense that support for or against a strike of organised workers or being for or against public ownership of essential utilities poses the challenge. The ruling Establishment invariably opposes industrial actions and despises public ownership but Brexit is more complex.

Some in the ruling elites believe the interests of the British Union are best served continuing to remain part of the tariff-free European Union despite the increased loss of political sovereignty demanded by the political superstructure which has emerged to debate, decide and administer the myriad of trading rules, agreements and regulations which bind the EU together.

To those in privileged positions of wealth and power they perceive no threat to their personal empires from the EU. Despite decades of membership the UK still remains one of the most poverty-stricken and unequal in the 28 member club. Pensions are amongst the lowest, working conditions in relation to average hours worked, paid holidays and trade union rights are amongst the worst and minimum wage protection is at the bottom end of the scale.

Being in the EU has not protected shipyard jobs on Clydeside or Tyneside and whole industrial sectors of manufacturing like steel and engineering have been decimated within the UK despite EU membership. 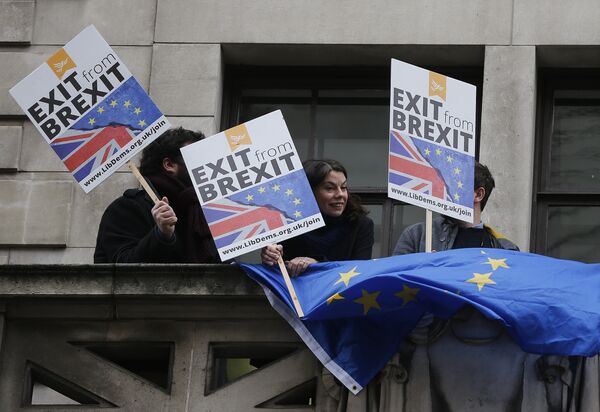 People demonstrate against Brexit on a balcony in London, Wednesday, Feb. 14, 2018, as Britain's Foreign Secretary Boris Johnson delivers a speech focusing on Britain leaving the EU. The Foreign Office says Johnson will use a speech Wednesday to argue for "an outward-facing, liberal and global Britain" after the U.K. leaves the bloc
© AP Photo / Frank Augstein

On the other hand, it is short-sighted and ‘protect the rich at all costs’ policies of successive Tory and New Labour governments which are to blame for shameful poverty levels and deindustrialisation of vast areas of the UK, not the EU membership. It is not EU policy to cut direct income taxes for the rich while increasing the indirect income tax burden for the poor with taxes like VAT.

It was the Thatcher/Major/Blair/Brown/Cameron and May Governments that imposed savage reductions on welfare to prioritise warfare and reduce taxation of big business profits to among the lowest in the EU, paving the way for reduced budgets for public services like health, education and justice.

Some in the higher echelons of the ruling classes believe there is more to be usurped by ditching the EU and its regulations and seeking to build new arrangements with the likes of the US and Trump, as any new free trade deals with them can be guaranteed to favour the bosses over the workers and thus improve profit margins. Although the rich are doing very well under the EU, some are so greedy they think they can do even better outside the EU.

The Jacob Rees-Moggs and Nigel Farages of the world couldn’t give a damn about poverty levels, wealth inequalities and economic justice. Their pursuit of No-Deal Brexit is firmly based on a vision of reduced regulations and restrictions on their ability to make more money. They are for big business first, last and always. They are no friends of the working class.

Some in the progressive trade union movement see Brexit as a fundamental threat to jobs and economic security for workers. They fear removing current regulations and protections will drive wages down and unemployment up.

Others within the trade union movement subscribe to an opposite view. They see the EU regulations as big business-friendly and the worker protections as largely illusory. They advocate leaving the EU and building a workers’ Europe based on social solidarity and greater emphasis on domestic policies designed to deliver wealth and power redistribution.

The question of Brexit is not black and white, simple or straightforward. Sure, many support it from a narrow anti-immigration and British chauvinistic point of view but others support Brexit while opposing racism and supporting socialist policies.

The Lib-Dem austerity, tuition fees, Trident, Bedroom Tax and Fracking supporting junkies oppose Brexit while the parties of the left generally, including the Communist Party of Britain, support Brexit. So it is wrong to define someone as progressive or reactionary based on their support or opposition to Brexit.

There are progressives and reactionaries on both sides of the argument. I’m as far removed on the political scale from Nigel Fraudage as it is possible to be but support Brexit. Most opponents of Brexit likewise wouldn’t want to be politically pigeon-holed with the likes of Tony Blair.

What is less contentious to me than the Brexit issue is the debate around democracy and what should happen now.

A narrow majority in England and Wales endorsed Brexit in 2016. More significant majorities rejected it in Scotland and Northern Ireland. It was only a consultative referendum but an important democratic exercise. It engaged many hitherto disengaged from the political process. However, democracy has to be viewed as a living and breathing organism not an inanimate object used once every so often before being hidden again in a cupboard. 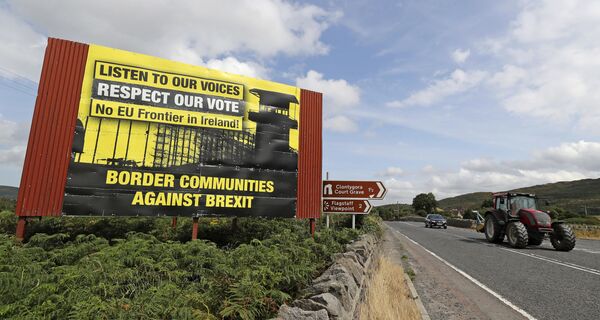 Anti-Brexit billboards are seen on the northern side of the border between Newry, in Northern Ireland, and Dundalk, in the Republic of Ireland, on Wednesday, July 18, 2018.
© AP Photo / Niall Carson

Evidence since 2016 exposes the reality that the Brexit side not only misled the electorate with dishonest statements, an unfortunate reality of most elections, but they actually broke the law in relation to funding and perhaps misuse of data. That is a serious situation.

In addition, there is a reasonable argument to suggest that many who supported Brexit did so on the assumption that it would be delivered via an orderly withdrawal agreement. Had they been presented with the prospect of a No-Deal Brexit and the inevitable uncertainties around jobs, trade and travel arrangements their decision may have been different. Although millions who voted Labour and Tory in 2017 endorsed manifesto commitments to Brexit both of those party commitments were to Brexit negotiated deals not to a No-Deal scenario. What is now on the agenda is clearly a No-Deal Brexit.

Boris Johnson and his talk of proroguing Parliament is undemocratic to the core. From a man elected Prime Minister with less than 100,000 votes, which is less than two percent of the registered UK voting population, it is the equivalent of being lectured on honesty by Tony Blair. He has no democratic legitimacy or credibility to govern the UK, full stop, but his right to pursue a No-Deal Brexit on behalf of the UK as a whole is even more non-existent.

The correct course of action now in the context of a Parliamentary Democracy is the urgent convening of a General Election. Jeremy Corbyn in this context is absolutely correct to pursue a vote of no confidence to remove Johnson from office. If Johnson won’t allow a General Election before October 31st he has to go. Corbyn should be installed as a strictly time-limited PM with only two tasks. To secure an extension of the EU withdrawal deadline and the calling of a General Election to decide whether a No-Deal Brexit really does command majority support in England, Scotland, Wales and Northern Ireland.

Such an election does not undermine democracy or the democratic decision of the 2016 referendum it enhances democracy by allowing the people to decide on a major issue with greater clarity and knowledge now available. Knowledge is power. A more informed decision can now be taken by ordinary people. That surely is the very essence of democracy.

Should Johnson succeed in the literal subverting of democracy by closing down Parliament to allow No-Deal Brexit to proceed by default the SNP has to respond to that emergency situation with a 31st October independence poll to allow us to withdraw from the unequal union which has become even more of a democratic farce than ever!

Should an October General Election be called, more likely in my opinion, the SNP must include a cast-iron commitment to independence in their manifesto stating clearly that securing a majority of the 59 Westminster seats up for grabs is an endorsement to arrange IndyRef2 not enter into further talks about holding one. A date for IndyRef2 no later than Autumn 2020 has to be a key plank of the SNP Manifesto or they will risk deflating many independence supporters and losing hundreds of thousands of potential voters.

The next few weeks are going to be anything but dull. Uncertain, unstable and probably unprecedented but not dull.