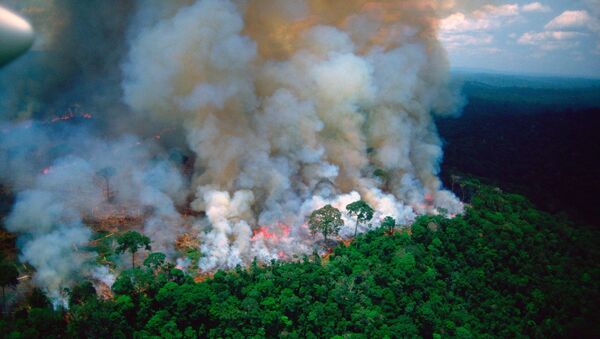 A record number of fires have been raging in the Amazon rainforest, in Brazil and in neighboring countries. The fires in the Amazon have drawn international attention.

The Brazilian government said Tuesday, cited by Reuters, that it welcomed all foreign aid from organizations or countries to help fight the forest fires in the Amazon, as long as it could decide how to use the assistance.

"Brazilian sovereignty is not negotiable", presidential spokesman Rego Barros told reporters, adding that Brazil was not opposed to dialogue with France, according to Reuters. President Jair Bolsonaro said earlier he wants French President Emmanuel Macron to withdraw "insults" made against him before he would consider accepting a $20 million offer of aid from the G7 nations.

Last week, French President Emmanuel Macron called on world leaders ahead of the G7 summit to prioritize putting out the wildfires that are destroying the Amazon. On Monday, Macron said that the Group of Seven industrialized countries will urgently allocate about 20 million euro [$22.2 million] to help extinguish the fires.

The Amazon rainforest, which produces about 20 percent of the Earth's atmospheric oxygen, is reportedly burning from wildfires at a record rate.

Environmental activists have been staging protests at Brazilian embassies worldwide and accusing pro-business Brazilian President Jair Bolsonaro of supporting farmers who are burning the rainforest to expand farming land.

According to satellite data provided by the Brazilian National Institute for Space Research, this year the wildfire area increased 82 percent compared to 2018. There have been reportedly 1663 new fires registered in the country last week, half of them in the Amazon basin.

Experts across the world are warning of grave consequences of the fires.

On Saturday, Brazilian authorities deployed troops in an attempt to fight the raging fires.