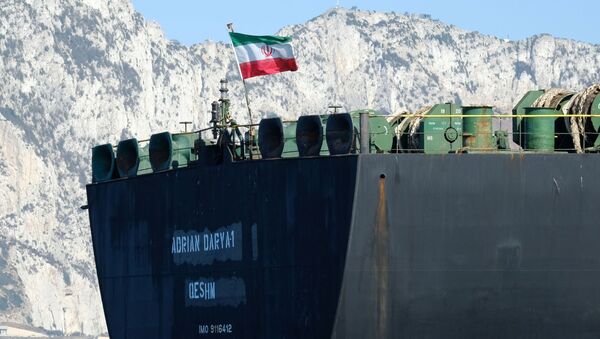 Svetlana Ekimenko
All materialsWrite to the author
The oil-laden Iranian tanker Adrian Darya currently no longer appears to be heading to Turkey, according to new data from Refinitiv Eikon shipping, following its release from detention off Gibraltar after a five-week standoff.

An Iranian government spokesman has announced that Tehran sold the oil on its tanker, which was seized by British Royal Marines in Gibraltar, the news agency IRIB reported.

Ali Rabiei made the announcement at a news conference on Monday in Tehran. He added the buyer will decide on the tanker's next destination, without identifying the recipient of the oil.

Earlier, US National security adviser John Bolton said Washington was strongly urging not to allow the Iranian tanker Adrian Darya to off-load in a Mediterranean port, in a Twitter statement made on Sunday.

“All hands on deck in the campaign to stop Iran from funding terror, destabilizing the globe, and breaking international sanctions. The illicit oil heading to Turkey on the Adrian Darya 1 must not be allowed off-loaded in port or at sea”, tweeted Bolton.

All hands on deck in the campaign to stop Iran from funding terror, destabilizing the globe, and breaking international sanctions. The illicit oil heading to Turkey on the Adrian Darya 1 must not be allowed off-loaded in port or at sea.

​Earlier, on 25 August the Iranian Navy's Rear Admiral Habibollah Sayyari stated the country's naval forces are ready to escort the oil tanker Adrian Darya (formerly known as the Grace 1), recently released by Gibraltar authorities after more than a month-long detention, if Tehran deems it necessary.

"Iran's naval forces have already safeguarded over 6,000 vessels passing through the Red Sea and the Gulf of Aden and are ready to escort Iranian vessels anytime and anywhere that is needed", the admiral said.

New data from Refinitiv Eikon shipping tracking showed on Monday that the Iranian tanker Adrian Darya, which has been at the heart of a standoff between Washington and Tehran, is no longer recorded as heading for Turkey, its indicated destination over the weekend.
Previous data suggested the oil-laden vessel was heading to the Greek port of Kalamata, with Greece saying it would not offer any facilities to the tanker.

The US warned Athens, as well as other countries and their businesses that they might face US sanctions if they "assist" the Iranian tanker in any way.

The Adrian Darya, formerly called Grace 1, was released from detention off Gibraltar after a five-week standoff.

The vessel had been impounded by local authorities with the help of British marines on 4 July on suspicion of carrying oil to Syria in breach of EU sanctions. Tehran slammed the detention as an illegal act of "piracy" and
has also denied the tanker was ever headed for Syria.

The Iranian tanker’s detention sparked a row between Tehran and London, which was followed by the detention of UK-flagged oil tanker Stena Impero in the Strait of Hormuz due to an alleged violation of international maritime regulations.

Tehran claimed that the detention was not tied to the spat around the Grace 1. 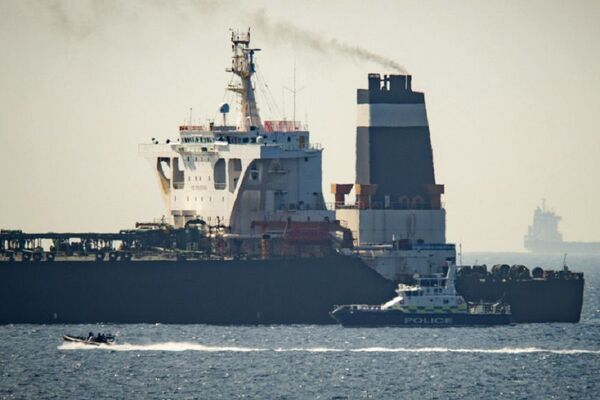 A view of the Grace 1 super tanker i near a Royal Marine patrol vessel in the British territory of Gibraltar, Thursday, July 4, 2019
© AP Photo / Marcos Moreno

The UK overseas territory's authorities released the Grace 1 on 15 August despite the United States issuing a warrant to seize the vessel while it was still in Gibraltar's waters in order to confiscate its cargo and $995,000 for alleged sanctions violations.

Gibraltar rejected Washington's request, citing the different stances on sanctions against Iran held by the EU and US.
Upon its release the tanker changed its name to the Adrian Darya.

The developments come against the backdrop of a dangerous spike in tensions with Iran following Washington’s decision to ditch the 2015 Iran nuclear deal last year, also commonly known as the Joint Comprehensive Plan of Action, thus largely halting the sale of Tehran's crude oil internationally.

US President Donald Trump had long been critical of the deal, claiming it had stopped short of curbing Iran's ballistic missile programme, and pulled the US out of it on 8 May 2018.

Tensions proceeded to flare dramatically, with the Persian Gulf witnessing attacks on oil tankers and other confrontations that the United States blamed on Iran and used as a pretext for beefing up its military presence in the region.

Tehran has rejected all allegations against it.