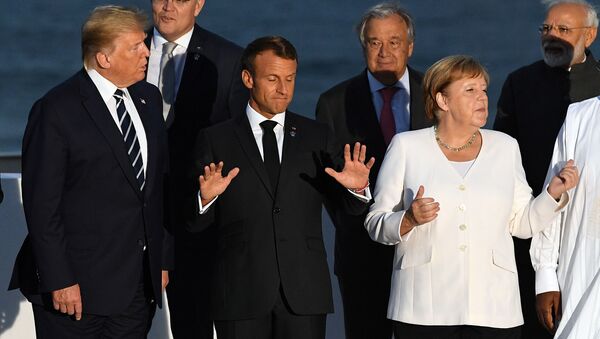 The G7 leaders closed the second day of the summit with talks on a number of issues, including the current trade war, relations with Iran and raging fires in the Amazon rainforest.

Host of the summit, French President Emmanuel Macron, threw a curve on Sunday when it turned out that he had invited Iranian Foreign Minister Mohammad Zarif as one of the guests.

Besides Zarif's sudden arrival, the second day revealed a rift between the G7 leaders over a proposal to bring Russia back into the bloc. According to The Guardian, Donald Trump had a spat with other G7 heads when attempting to promote the idea of ​​Russia's return to the group.

The US president, moreover, has been facing pressure over the trade war with China from his G7 allies, who called on him to reduce tensions due to slowing global economy.

The summit, which kicked off on Saturday, has been marked by protests in numerous cities around Biarritz. On the opening day, one of the processions in Bayonne ended in clashes with the police, during which law enforcement officers responded with water cannons and tear gas.

On Sunday, a rally against French President Emmanuel Macron was held in the neighbouring city of Bayonne. People took to the streets with his portraits stolen from city halls across the country.

"Despite the fact that only very few violent incidents were observed during the three days, about 100 people were arrested between 23 and 25 August, with about 70 of them placed in pre-charge detention with some trials expected to start today", Amnesty International said in a news release.

Among the arrested were three women observers from the French Human Rights League. The police arrested them on August 24 and released a day later, the release said.

Amnesty International claimed that the G7 meeting had been marred by an unjustifiable crackdown on freedom of assembly and movement.

"From the beginning of this G7 Summit in Biarritz, it was clear that the French authorities had a plan to restrict freedom of assembly and movement, with the announced presence of more than 13,000 police to man the area", Amnesty International’s France researcher Marco Perolini said in the release.

"One of the things we have seen over the past years as Canada has faced increasingly extreme wildfire events is there is a global network of support and friends that lean on each other", Trudeau said.

Trudeau said extreme weather events such as a drought in Brazil have allowed the Amazon blazes to spread across thousands of miles of the rain forest.

"The toll of human activity and extreme weather events on our communities, our environment our help and our world will continue to climb unless we take decisive action, that’s part of our broader commitment to fight climate change", the Canadian prime minister said.

It is up to the leaders of the Group of Seven (G7) industrialized nations to decide whether Russia rejoins their group, United Nations Secretary-General Spokesman Stephane Dujarric told a press conference.

"That decision is for the G7 to make", Dujarric said when asked about the prospect of Russia rejoining.

“Regarding Russia and the situation in Ukraine, we had a long discussion... It prevented a consensus on inviting Russia to our table”, Macron said.

“The invitation to the negotiating table is a decision of the inviting country. But the transition from the G7 format to the G8 format must be supported unanimously”, he said.

"I am marginally more optimistic", he said after discussing Brexit at the G7 with fellow leaders, while admitting: "It will be difficult... there is a substantial disagreement" between Britain and the EU.

According to France's BFMTV channel, the watches were made of recycled ocean plastic in the Basque region.

Indian Prime Minister Narendra Modi has said that he held "excellent" talks with his US counterpart, Donald Trump, on the sidelines of the G7 summit earlier on Monday, with the sides agreeing to tackle bilateral trade issues "soon."

Excellent meeting with @POTUS @realDonaldTrump! We had useful discussions on bilateral matters. We agreed to address trade issues for mutual benefit soon. Looking forward to expand cooperation as large democracies for the benefit of our citizens and global peace and prosperity. pic.twitter.com/xfZgbP8yZB

Just wrapped up a great meeting with my friend Prime Minister @NarendraModi of India at the #G7Summit in Biarritz, France! pic.twitter.com/q0NOnEcjFO

"We'll see ...We had a talk and no vote or anything, but we had a talk about Russia. My inclination is to say yes, some people disagree with me, some people don't," Trump told reporters, when asked if he would invite Russia to join the G7 summit next year.

"So we did have a discussion about Russia, we'll see, I think it's advantageous, but other people do not necessarily agree. Maybe at this time, I think I could say," Trump added.

The US president said the next G7 summit could be held in Miami, which is conveniently located.

“I have German in my blood. We’ll be there,” Trump says when asked why hasn’t made visit to Germany (other than Hamburg for G20 in 2017).

Asked if he’ll go to Germany on way to Poland later this wk: “That's a little bit too soon."

Very productive meeting with Angela Merkel, the Chancellor of the Federal Republic of Germany, at the #G7Summit in Biarritz, France! pic.twitter.com/ShhIRLlG9I

"Our experts needed to once again consider a number of aspects that needed additional comments, in particular, banking issues and problems related to oil," Zarif said upon arrival in Beijing.

The draft proposal struck between French Finance Minister Bruno Le Maire, US Treasury Secretary Steven Mnuchin and Donald Trump's White House economic adviser Larry Kudlow stipulates that France would repay to companies the difference between a French tax and a planned mechanism being drawn up by the Organisation for Economic Co-operation and Development (OECD).

"Great respect for the fact that President Xi & his Representatives want “calm resolution.” So impressed that they are willing to come out & state the facts so accurately. This is why he is a great leader & representing a great country. Talks are continuing!" Trump said.

Donald Trump said Monday during the third day of the G7 summit that China had contacted US trade officials overnight to say they wanted to return to the negotiating table.

"China called last night our top trade people and said ‘let’s get back to the table’ so we will be getting back to the table and I think they want to do something. They have been hurt very badly but they understand this is the right thing to do and I have great respect for it. This is a very positive development for the world," Trump said at the G7 summit in France's Biarritz, as quoted by CNBC.