G7 Summit Exposes Rift Between Trump and His Counterparts, US Media Claims 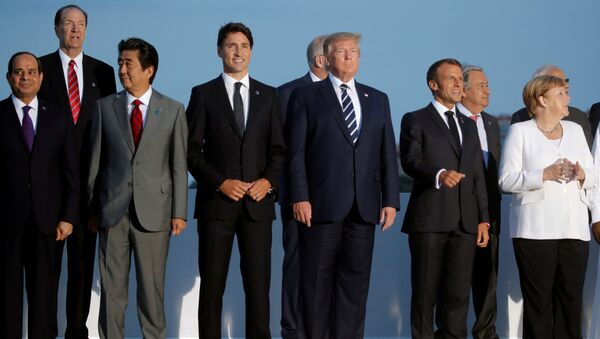 Zara Muradyan
All materials
Heads of state gathered in Biarritz, France, for the annual G7 summit over the weekend to discuss a wide array of global issues, including trade wars, nuclear tensions, and environmental concerns - and the three-day meetings have reportedly exposed a rift between US President Donald Trump and his counterparts within the Group of Seven.

While President Donald Trump has declared that the G7 members are having "very good meetings" and getting along "very well", The Wall Street Journal reported that POTUS "clashed" with the other six members of the Group of Seven over a number of foreign policy issues, including the US trade war with China, Russia's potential return to the G8 format, and the ongoing tensions with Iran, during the annual summit held in the French town of Biarritz on 24-26 August.

These disagreements, per the publication, have demonstrated Trump's "isolation on the world stage".

One of the issues that reportedly sparked a "fierce argument" was Russia's return to the G7 group. President Trump earlier revealed that he had a "lively" discussion with his counterparts, but refused to disclose who specifically agreed or disagreed with him on reviving the G8 format.

According to another report by The Guardian, Trump argued that on issues such as Iran, Syria and North Korea, it made sense to have Russia's vote.

The G8 format ceased to exist in 2014 after members of the group refused to recognise Crimea's reunification with Russia as a result of a March referendum. They also accused Moscow of meddling in Ukraine's internal affairs and introduced sanctions, while the Russian side insisted that the peninsula's residents made their choice via a democratic vote, held in compliance with international law.

Over the weekend, G7 members sought to convince Trump to scale back the trade dispute with China, insisting that such disagreements contribute to overall economic weakening. Trump, however, reaffirmed his intention to continue the duel with Beijing, noting that while he has the right to declare a national emergency in this regard, he will not do it "right now".

He admitted to having "second thoughts" on the escalating dispute, which led the media to assume that the president wanted to defuse tensions. Hopes were dashed after it turned out that his words were misinterpreted: the White House later clarified that he only regretted "not raising the tariffs higher".

He also brushed off grievances over a potential recession, saying that he was "not concerned" about the markets' reaction to his decision to increase tariffs on $250 billion worth of Chinese goods from 25 percent to 30 percent starting 1 October, in addition to the surge from 10 percent to 15 percent on another $300 billion in Chinese products beginning 1 September.

The Wall Street Journal further noted that the US president gave a completely different assessment of the continued discussions on the spiraling tensions with Iran than his summit counterparts.

Cracks emerged after French officials announced that the group had agreed at Saturday's dinner that Macron would deliver a message to Iran on behalf of the G7. Trump publicly refuted the claims, saying that he had not discussed the issue.

According to an unnamed source, POTUS did not agree to make a joint statement, or the that Macron had played intermediary between the United States and Iran.

As media reports about the disagreements keep flooding in, Trump felt compel to refute the speculation and, as per usual, took to Twitter to do that. The president revealed that he and his summit counteparts are "all laughing at how knowingly inaccurate the US reporting of events and conversations at the G7 is".

In France we are all laughing at how knowingly inaccurate the U.S. reporting of events and conversations at the G-7 is. These Leaders, and many others, are getting a major case study of Fake News at it’s finest! They’ve got it all wrong, from Iran, to China Tariffs, to Boris!

Just hours before Trump embarked on a three-day trip to the French coastal town of Biarritz to meet his counterparts from the Group of Seven nations - Britain, Canada, France, Germany, Italy, and Japan - he reissued his threat to introduce tariffs on French wine imports to the US after Paris' move to impose digital services tax on American tech firms operating in France.