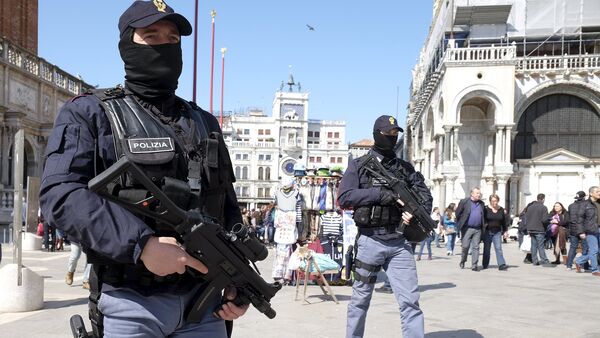 Italian police are currently on alert in a search for a dangerous murderer who escaped a Naples prison, asking that anyone seeing him immediately contact emergency numbers.

A 31-year-old Polish criminal escaped from the Poggioreale prison in Naples on the morning of 25 August using sheets for a rope, ANSA reported. The Public Prosecutor's Office is coordinating a search for the criminal “considered to be dangerous”, with a substantial amount of forces involved.

Robert Lisowski, a Polish-born murderer some 1.80 meters tall, reportedly climbed over the wall of the district house to the side of Francesco Lauria using a rope made from bedsheets, while attending mass in a little church in the prison compound.

​Luigi Castaldo, provincial secretary of Osapp Naples, stated that the incident should be blamed on a lack of personnel, and denounced the “overcrowding” of over 800 prisoners beyond the facility's regulatory capacity.

"This data has been reported on the deaf ears of the administration", - Castaldo told ANSA.

"In Poggioreale, as in other penitentiaries, there is a control system with video surveillance for the interior and the exterior; in addition, there is the patrol around the prison walls: I wonder, did everything work perfectly?" added Samuel Ciambriello, Campania's guarantor of prisoners.

Lisowski was arrested by Naples police on 5 December 2018 after murdering 36-year-old Ukrainian Iurii Busuiok, an immigrant with a criminal record who reportedly lived in Italy for 9 years. Lisowski was identified 5 days after the stabbed corpse of the victim was found in Mario Pagano. Lisowski was then charged with aggravated murder.

"Now it is a priority to capture the fugitive", said Emilio Fattorello, secretary for Campania, as reported by la Repubblica. "The serious story brings to light the security priorities - often overlooked - with which the women and men of the penitentiary police of Poggioreale have to deal daily", he added.

This is a first successful escape in the history of Poggioreale prison in Naples, which was opened 1919. A few years ago a similar rescue attempt was made by a prisoner, but ended with serious physical injuries experienced by a bad fall.

An even more unfortunate escape story was recently reported by South American media when infamous Brazilian drug trafficker Clauvino da Silva tried to leave prison in Rio de Janeiro while dressed in a latex mask, black wig and the clothes of his teenage daughter who came to visit. Silva was stopped by prison guards, who noticed his nervousness while he was walking out the main door. The criminal was found dead in his prison cell just a few days after the incident, with local media reporting that he had hung himself with a bed sheet.