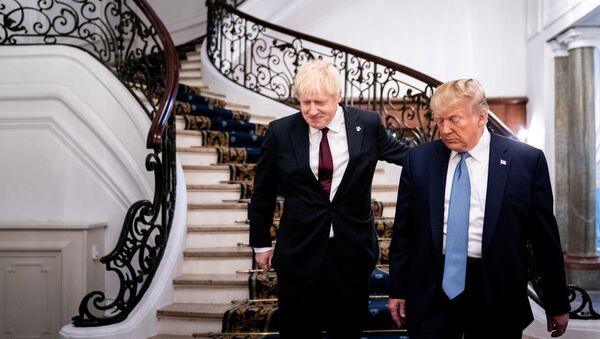 UK Prime Minister Boris Johnson has jumped at the opportunity to again bring up the issue of Brexit at the G7 summit in the French town of Biarritz. According to scholars, Johnson is seeking to strengthen ties between the US and the Commonwealth ahead of the 31 October deadline.

After calling on the EU to scrap the Irish border backstop from the Withdrawal Agreement, UK Prime Minister Boris Johnson went further, stating during the final day of the G7 summit that in case of a no-deal Brexit, the UK would withhold much of the £39 billion divorce bill and spend it domestically.

The Brexit divorce bill negotiated under ex-PM Theresa May is a sum of money the UK would have to pay to the EU to settle its share of financing all its obligations while it was still a member of the bloc. As the 31 October deadline nears, Johnson has repeatedly stated that the UK will withdraw "no matter what" – either with a deal or without.

My message to G7 leaders this week is this: the Britain I lead will be an international, outward-looking, self-confident nation. 🇬🇧 #G7 #TeamUK pic.twitter.com/Jm5LDjCW6e

​On 26 August, however, EU officials warned the British government that if the UK refuses to pay the £39 billion financial settlement it would 'lionise' the EU-UK trade talks.

"Prime Minister Boris Johnson’s comment demonstrates that he is speaking to his political base and is not embedded in political reality", said James Downes, a professor in comparative politics at the Chinese University of Hong Kong. "The political reality is that if the UK leaves without a deal, the UK will likely be obliged to pay the full amount to the EU. Most importantly, the EU are unlikely to budge on this issue".

According to the professor, the British prime minister may find himself between a rock and a hard place if he "acquiesces to the EU’s full demands, then he will have been seen to have betrayed the ‘Leave’ electorate". As a result the Conservative Party will lose more voters to the Brexit Party under Nigel Farage, the academic suggested.

At the same time, "if the prime minister and the British government leave with a no-deal, this will be costly economically and also politically for the country", Downes admitted.

"The prime minister is still stuck in a ‘Catch 22’ situation - much like his predecessor Theresa May - with no clear way out at the moment", the professor opined. "The most likely current outcome may be a general election if the current political impasse continues".

At the #G7 I’ve had meetings with several world leaders, standing up for the values that we in the UK believe in. #TeamUK🇬🇧 pic.twitter.com/klGFRUHqmU

​For his part, Dr Ei Sun Oh, a senior fellow at the Singapore Institute of International Affairs, expressed confidence that the British prime minister "is intent upon definitely doing it by end October, deal or no deal".

According to him, "what Europe can realistically threaten UK with is of course future unavailability of low-tariff access to European markets".

Apparently, the Singaporean academic continued, Johnson "is hard at work sealing a free-trade deal with the US to make up for the loss".

On Monday, US President Donald Trump again dropped hints about the "fantastic trade deal" Britain will be able to strike with the US after leaving the European bloc. He emphasized that PM Johnson was the "right man" to make Brexit happen.

"It is incredibly unclear what such a trade deal between the US and the UK would look like at the present moment", Downes observed. "All we have seen so far is political rhetoric, devoid of clear substance that is again embedded in political reality. Signing trade deals in twenty-first century politics are time consuming and also take time to enforce".

To illustrate his point, the Hong Kong-based academic referred to the 2014 Comprehensive and Economic Trade Deal Arrangement between the EU and Canada that prompted many contradictions and partially came into force only on September 21, 2017.

"It is also unclear how beneficial such a trade deal would be for the UK and how much of an improvement this would be to the current trade deals that the UK has in being an EU member state", Downes said.

According to Oh, "Trump can offer to UK the kind of custom semi-union that the US has with Canada".

"But even with Canada, Trump has instigated many trade issues such as over dairy products", the scholar remarked.

He predicted that that "free trade deals will also be pushed by UK with other major British Commonwealth countries such as Canada and Australia".

On 25 August, Johnson tweeted that during the conference he had met with the US president to discuss a potential trade deal.

Today at the #G7 I’ve met with @POTUS to discuss a potential trade deal, raised the UK's concerns about fires in the Amazon, and pledged new funding for girls' education. #TeamUK🇬🇧 pic.twitter.com/Mrq7pekLon