US Ambassador to Germany Calls for United Front on China, Tells Europe to ‘Dial it Up’ 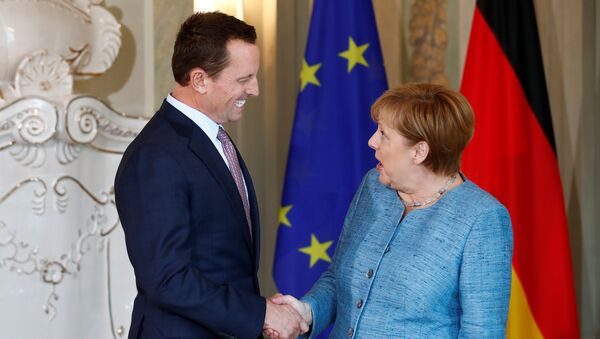 Svetlana Ekimenko
All materialsWrite to the author
US President Donald Trump's trade war with China boiled over Friday, as both countries moved to impose new tariffs, causing shares of major US companies to plunge.

US Ambassador to Germany Richard Grenell extolled a “humming” American economy and voiced the importance of a “united front” on China when he spoke during a Fox News interview during "Cavuto Live" on Saturday.

When host David Asman asked the envoy whether Washington could effectively challenge China, referencing UK Prime Minister Boris Johnson’s desire to see Donald Trump scale back attacks on the Asian giant, and suggested the G7 might not face a united front on the issue, Grenell responded:

“Look, let me be very clear, if we want a united front then Europe needs to dial up. We don’t need to dial back".
"The fact of the matter is our economy is the one that’s humming and I hear every single day that German CEOs are racing into the U.S. because of the pro-growth strategies".

When it comes to the world economy, Grenell claimed during his appearance on Fox News that “China doesn’t play by the rules”. He added he believed since more palliative measures had not worked, President Trump’s tariffs and hardline tweets were the appropriate response to Beijing’s actions.

As he praised the American economy, the ambassador continued:

“Look, the German economy is struggling. People are looking at the largest economy in Europe and they’re trying to figure out what to do. And what we’re saying is, when we go to the G7 and we’re trying to talk about growth, follow us. Do what we did".

Grenell also told the weekend news programme that if the European economy wanted to grow there “needs to be a plan with a deregulation aspect", calling on Europe to follow the example of the US economy.
Grenell added Europe needs “fiscal expansion” and “tax cuts".

In a ringing endorsement of the envoy’s statements, Donald Trump Jr. tweeted:
“Once again my friend @RichardGrenell hits the nail on the head".

Once again my friend @RichardGrenell hits the nail on the head. https://t.co/lscls6oDs8

​Richard Grenell later took to Twitter to again call on Europe to sign up to Washington’s firm stance on China:
“We need a united front on China right now. Dial it up, Europe", he tweeted.

We need a united front on China right now. Dial it up, Europe. #dialitupeurope

Grenell’s statements came against the backdrop of President Trump’s new Twitter salvo in the raging US-China trade war, vowing his administration will retaliate against Beijing by raising tariffs on imports from the Asian nation.

For many years China (and many other countries) has been taking advantage of the United States on Trade, Intellectual Property Theft, and much more. Our Country has been losing HUNDREDS OF BILLIONS OF DOLLARS a year to China, with no end in sight....

The move followed just hours after Beijing announced a tariff hike on $75 billion in US imports.

Richard Grenell, nominated by Donald Trump in September 2017 as US ambassador to Germany, has been seen as a divisive figure.
In March 2019 several German politicians intensified their public criticism of Grenell, with one politician calling for his expulsion.

In March, Grenell publicly criticised the German government after reports that Finance Minister Olaf Scholz’s budget plan would see Germany miss its target of increasing defence spending to 1.5 percent of national income, by 2024 — a number that was already shy of the 2 percent mark agreed by NATO members.

Amid the ongoing differences between Berlin and Washington over Germany's contribution to NATO, Grenell also voiced a US threat to consider withdrawing some of its troops stationed in the country.

"It is actually offensive to assume that the US taxpayer must continue to pay to have 50,000-plus Americans in Germany, but the Germans get to spend their surplus on domestic programmes", Grenell told DPA in comments carried by the German media in early August.

The US ambassador to Berlin also sent threatening letters to German companies building the Nord Stream 2 pipeline between Germany and Russia, reportedly warning of "a significant risk of sanctions" if they did not pull out of the project, Bild am Sonntag reported in January this year.

The remarks prompted a backlash from high-profile German politicians, with Carsten Schneider, a high-ranking member of the Social Democrats telling German news agency DPA that “Mr Grenell is a total diplomatic failure".