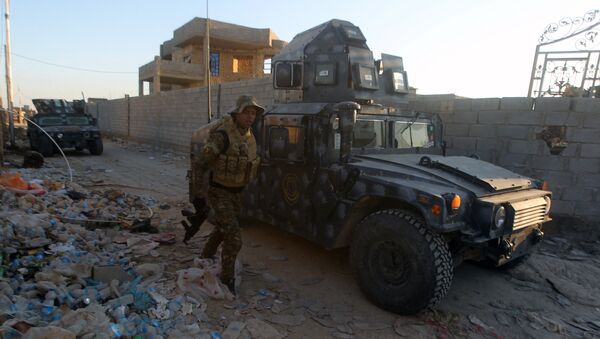 BEIRUT (Sputnik) - An unknown drone has attacked two military vehicles belonging to the Popular Mobilisation Forces (PMF), an Iran-linked umbrella of mostly Shiite paramilitaries, in Al-Qaim district of the Iraqi province of Anbar, near the border with Syria, Ahmed Dilmi, the district’s head, reported.

"An unknown drone struck two military vehicles of the Popular Mobilisation Forces in the district. The aircraft destroyed vehicles after striking them near the district's Akkas gas field. There might be dead since both vehicles have been completely destroyed, however, we continue waiting for additional information regarding the incident", Ahmed Dilmi said.

Earlier in the week, Abu Mahdi Muhandis, the deputy chairman of the PMF, claimed that Israeli air forces bombed Iraqi military facilities, with the support of the United States.

Since the second half of July, a number of airstrikes reportedly has hit Shiite militia bases in Iraq. One of the last ones occurred this Tuesday, causing a fire at a PMF ammo depot at al-Bakr airbase, located just north of Baghdad.