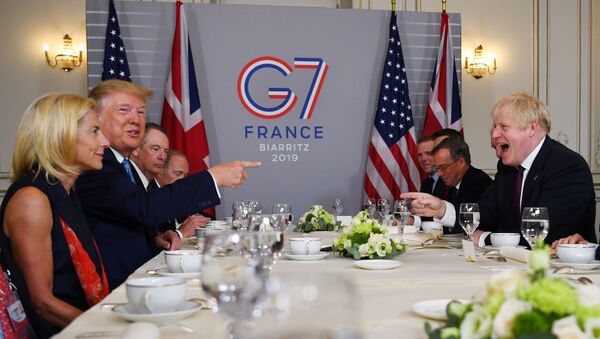 Svetlana Ekimenko
All materialsWrite to the author
US President Donald Trump met with new UK Prime Minister Boris Johnson at a breakfast meeting during the second day of the G7 summit in Biarritz, France, promising a "very big trade deal" with the UK, and hailing its impending exit from the EU.

The G7 summit kicked off in Biarritz, France on Saturday, with the second day of the event starting with US President Donald Trump having breakfast with UK Prime Minister Boris Johnson.

However, it was an earlier photo of the two leaders in the same room together, gearing up for the G7 summit that has evolved into a hilarious meme, gathering swift momentum and exploding into a twitter-generated storm of online wit.

​Once social media users pounced on the photo, there was no end to the mirth, as people turned the photo into a meme, with some suggesting reasons for why Trump was pointing at Johnson:

Is Trump pointing at Boris and saying "you weren't elected by the people, me neither, we have so much in common, we are going to be the bigglyest of friends".

A dead-heat in the 'Pull my finger' joke race

Trump: Get a load of his hair!
Boris: You're one to talk!

​Many compared the photo with other well-known memes roaming the web:

​And users had a field day with inventing captions for the photo:

Look it's dumb and dumber

​As the two world leaders held their first meeting against the backdrop of the ongoing G7 summit in France, US President Donald Trump praised UK Prime Minister Boris Johnson as the “right man for the job” to deliver Brexit.

The US president pledged a “very big trade deal".

Johnson insisted the deal will not be “smooth sailing", adding the US must open up its markets if a post-Brexit trade deal is to be agreed.