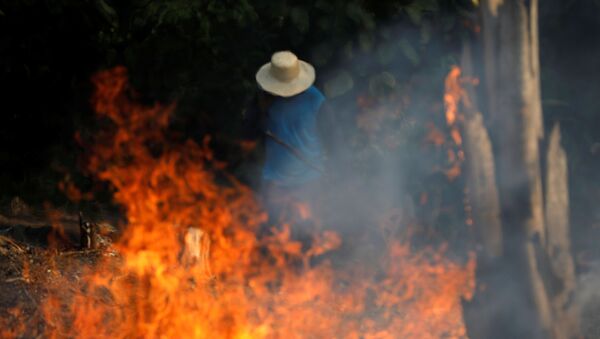 Zara Muradyan
All materials
French President Emmanuel Macron earlier called on his counterparts to put a premium on the massive fires ravaging Brazil's Amazon rainforest ahead of the Group of Seven (G7) summit in France's Biarritz.

Femen, the infamous feminist group known for its provocative topless protests, has urged French President Emmanuel Macron to put fires wiping out huge areas of Brazil's Amazon rainforest at the top of the agenda of the G7 summit, held in France's Biarritz on 24-26 August.

"Femen asks Emmanuel Macron to make this environmental emergency the main theme of his participation at the G7 summit in Biarritz and adhere to the policy of non-ratification of the EU-MERCOSUR trade deal", the group wrote on Facebook, while calling for a "real campaign to condemn the environmental policies of [President of Brazil] Jair Bolsonaro".

Having posted photos of two topless activists against the background of Notre Dame de Paris to show support #ForAmazonia, the movement drew parallels between the rainforest fires and the blaze that engulfed the medieval French cathedral earlier this year:

"When Notre Dame burned down, the whole of France was ignited. Now, when the lungs of the world are burning, the whole world should rise".

The French president took to Twitter earlier this week to call on members of the Group of Seven to discuss the Amazon wildfires during the summit, having attached a stock image from years earlier.

Macron's spokesperson later said that France would block an EU-MERCOSUR trade deal with Brazil and its Latin American neighbours over what he considered Bolsonaro's failure to tackle the fires and climate change.

In response, Brazil's president strongly criticised his French counterpart's suggestion to address the Amazon matter without the involvement of regional countries:

"I regret that Macron seeks to make personal political gains in an internal matter for Brazil and other Amazonian countries. The sensationalist tone he used does nothing to solve the problem. The French President’s suggestion that Amazonian issues be discussed at the G7 without the participation of the countries of the region evokes a misplaced colonialist mindset in the 21st century", Bolsonaro said.

Fires have been raging in Brazil's Amazon rainforest, known as the lungs of the planet, for over three weeks now, with environemntalists claiming that the massive blaze is human in origin and blaming Bolsonaro's policies for its spread.