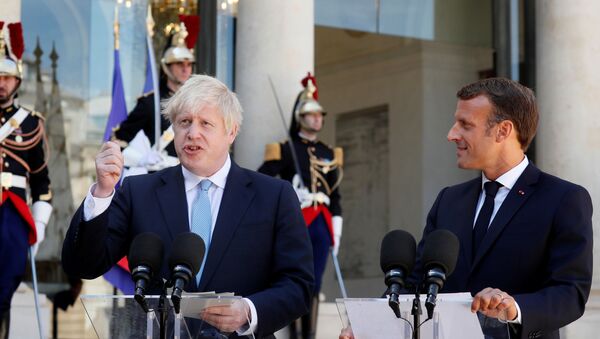 British Prime Minister Boris Johnson’s meeting with French President Emmanuel Macron in Paris has ended in a stalemate. The pair were primarily discussing the future of the Irish backstop which Johnson claims must be removed if the EU wants to sign a Brexit deal with the UK.

Macron, however, maintained his and indeed Brussel’s stance, that any fresh agreement struck between the bloc and Britain, must be similar to the already existing divorce bill that was drafted by Johnson’s predecessor in Number Ten Downing Street, Theresa May. So with this in mind is a no-deal Brexit now inevitable? Former London Mayoral candidate Winston McKenzie reflects on possible changes to the Brexit negotiation process.

Winston McKenzie: Johnson needs to walk away, he’s got thirty days, he should go back and tell the EU that it’s all over, I call the shots, we are Great Britain after all.

They are standing around all belts and braces Merkel and Macron, giving it large and posing around, but we are in charge, we rule our destiny, why should we give in to them and become a vassal state dependent on the USA and grovelling to Europe?

We would jump out of the pot and straight into the fire. Boris has got to find the backbone to walk away right now, for goodness sake what is any different now from when Theresa May was around? Nothing’s any different, the EU is adamant that they are not giving into us, this is a war of attrition.

Sputnik: Is the Irish backstop as unnecessary as Boris Johnson claims?

Winston McKenzie: The backstop is just a myth, the EU is just putting that there to dazzle us. It’s like two fighters in the ring and one has a superior jab to the other, they’ve got that backstop in our face and that’s not the issue.

The issue is time. Now I’ve got a lot of respect for Boris Johnson, he’s come in and it would seem that he’s going about things the right way, but you have to ask yourself - has he got the bottle to do what we want him to do? That is to walk away. What is he pandering around with Macron and Merkel? Their ideas are dead in the water, so I’m very concerned.

Winston McKenzie: There is no choice but to leave without a deal. There is no deal, it’s impractical, there is not enough time for it to go through parliament, the wolves are gathering in their numbers ready to destroy the government and pull at their ideas in any way they can, there is no time to put any type of legislation through.