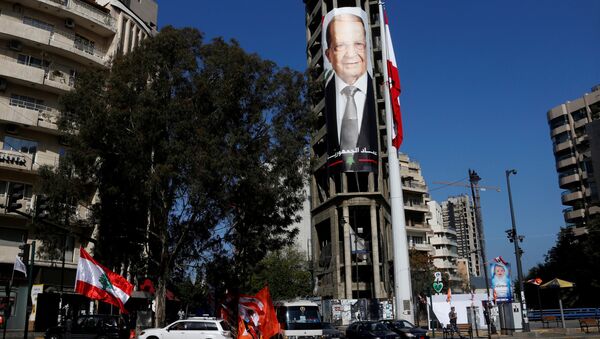 It was reported earlier in the day that two Israeli drones crashed near Hezbollah's headquarters in Beirut, Lebanon, overnight, with one of them exploding in the air. The IDF has yet to comment on the alleged incident.

Lebanese Prime Minister Saad Harri has slammed the "Israeli aggression" as a "threat to regional stability and attempt to increase tensions" following the crash of two alleged Israeli drones in Beirut.

The prime minister has denounced the purported incident as "a blatant attack on Lebanese sovereignty" in "flagrant" violation of UN Resolution 1701 (2006) aimed at ending the hostilities between the Lebanon-based Hezbollah and Israel.

Hariri continued by saying that he was in engaged in consultations with President Michael Aoun on further steps to address the "new aggression", while adding that there were several aircraft in the sky over Beirut and its suburbs.

The prime minister stressed that the Lebanese government would "assume its full responsibility to ensure that no hostile plan threatens security, stability and national sovereignty".

One drone allegedly fell in the southern suburbs of Beirut, while a second UAV went off in the air on Sunday, a Hezbollah official was cited as saying by Reuters. The source claimed that the drones were Israeli. The explosion reportedly caused significant damage to the Hezbollah press service's building and left three people wounded.

In a parallel development, a source at the Beirut International Airport has claimed that a group of Israeli fighter jets carried out a flyover of the Lebanese capital and southern Lebanon following the crash of alleged Israeli drones.

"Four Israeli Air Force aircraft invaded Lebanese airspace. We saw them flying over Beirut and southern Lebanon. Having made a number of manoeuvres, they left Lebanese airspace", the insider said.

The Israeli military has yet to comment on the reports.

The incident came a few hours after Israel conducted airstrikes on what it called "Iranian Quds Force operatives and Shiite militia targets" in Syria to thwart an alleged attack by multiple Iranian drones on Israel.

Israel and Hezbollah fought a 34-day war in the summer of 2006, with Israeli troops invading Lebanon after the militant group kidnapped two Israeli soldiers in a cross-border raid. The war claimed the lives of over 1,300 people and ended in a UN-brokered ceasefire.