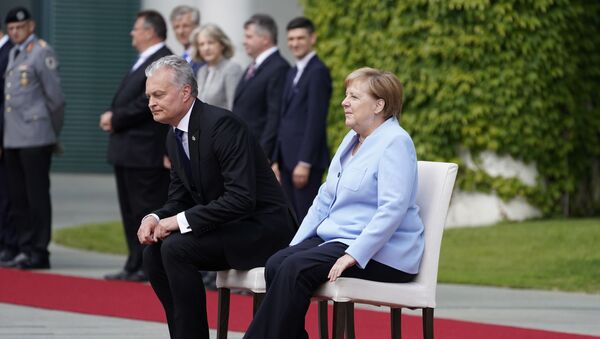 BERLIN (Sputnik) - There has been a constructive discussion regarding Iran at the ongoing G7 summit in France with all sides advocating a diplomatic solution to the issue of the Tehran nuclear programme, German Chancellor Angela Merkel told reporters.

"There has been a good and constructive discussion, which has showed that everyone is united in that Iran should not get nuclear weapons and that everyone wants to achieve that through negotiations", Merkel said on the sideline of the summit.

She stressed the necessity of preventing further escalation of tensions since "if no action made, there is fear, that in September Iran will continue exiting the Joint Comprehensive Plan of Action [JCPOA]".

The issue of the agreement with Iran is one of the most salient during this summit, as the majority of G7 countries, supportive of the JCPOA, are keeping a united front against the United States, which in recent years has consistently advocated for tougher measures against the Islamic republic.

Earlier this week, President Macron proposed to soften the sanctions or to create a compensation system to improve the living conditions of Iranians, eliciting a positive response from Tehran.

On 8 May 2018, US President Donald Trump unilaterally withdrew his country from the deal and reimposed economic sanctions on Iran. Exactly a year later, Tehran announced its decision to partially suspend its JCPOA obligations and give the other signatories a deadline of 60 days to save the accord. As the deadline expired, Iran began enriching uranium beyond the 3.67 percent level, outlined in the JCPOA, warning that it will gradually abandon its nuclear commitments every 60 days.