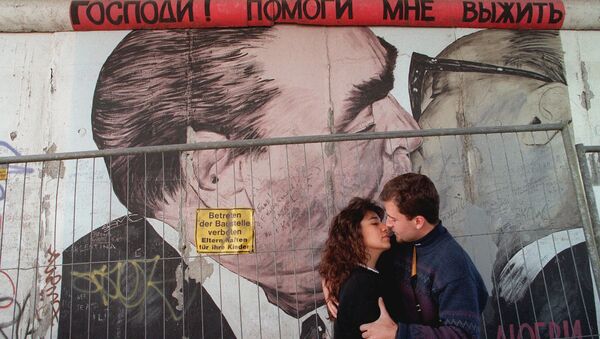 © AP Photo / Karsten Thielker
Subscribe
Debate around Moscow’s possible return to the G7 flared up after US President Donald Trump agreed to his French counterpart Emmanuel Macron's proposal to invite Russia to the summit in 2020 in the US. While some countries, like Japan, have indicated that they are open to the idea, German Foreign Minister Heiko Maas has rejected it.

Heads of the regional governments in the former East German states of Brandenburg, Saxony, Thuringia, and Saxony-Anhalt have demanded that Russia be invited back to what was the Group of Eight prior to the events in Crimea and Ukraine, the German outlet Die Welt reports. According to the newspaper, they are pushing for a fresh start in dialogue with Moscow, which broke down in 2014.

"I do not want to give any advice to the participants of the G7 meeting. But the more formats there are to speak with Russia, the better”, he told the outlet, noting that this was the reason why he invited Russian President Vladimir Putin to visit his state during his trip to St Petersburg.

Kretschmer noted that when it comes to relations with Russia, the eastern parts of Germany are more sensitive than the western ones. According to him, Moscow’s isolation and the sanctions against it would not be well received in eastern Germany.

Thuringia’s Prime Minister Bodo Ramelow, representing the left-wing party Die Linke, echoed his stance, supporting a dialog. Although he noted that excluding Russia from the then-G8 was correct at the time, he also pointed out that sanctions have hardly improved the situation. Ramelow added that reviving the G8 would be a sign of “sovereignty and political foresight". At the same time, he criticised "the negative effects of the ‘America First’ ideology of the American president", branding it “a risk for the prosperous world economic development", arguing that it weakens international relations.

Prime Minister of Brandenburg Dietmar Woidke, who is a member of the Social Democrats, told Die Welt that “Europe and the US need as much dialogue with Russia as possible” following the termination of the INF Treaty.

“We should look each other in the eye and talk. There must be a basis of trust again… It would be good if Russia provides the conditions for its return to the G7/G8”, he said, adding that the crucial factor is starting to implement the Minsk Agreement.

The head of Saxony-Anhalt’s government, the CDU’s Reiner Haseloff, also expressed hope that Russia would return to diplomatic talks. He emphasised that sanctions are particularly harmful to eastern Germany’s economy and especially to medium-sized companies, noting that they had not led to a noticeable improvement in the situation in Ukraine.

Vice-Chair of the German Bundestag Wolfgang Kubicki, from the Free Democratic Party, also spoke in favour of inviting Russia back.

"Only by talking do we clearly identify and understand problems and differences as well as hopefully push Moscow to return to international law as a next step", he told the outlet.

At the same time, Germany’s Foreign Minister Heiko Maas has rejected these demands: "G7 and G8 depend on the progress in Crimea and eastern Ukraine, and as long as nothing changes there, there will be no movement on the issue".
Before the current G7 summit in the French city of Biarritz began, Donald Trump had backed French President Emmanuel Macron's proposal to invite Russia to the next G7 summit in the US in 2020, saying that Russia should return to what used to be the G8.

While some countries, like Japan, are open to the idea, others, like Canada, remain stridently opposed to it. As Donald Trump noted during his talks with Japanese Prime Minister Shinzo Abe at the summit, there is “a number of people who would like to see Russia back”.

“I think it would be advantageous to many things in the world. It's something that we're discussing. I don't know that we'll make a decision one way or the other, but we did have a discussion about Russia last night”, he said.

On Sunday morning he also noted it's “certainly possible” that Russian President Vladimir Putin would be invited to the grand gathering next year.

In his turn, Putin said earlier this week that his country would regard any form of dialogue with the G7 nations as useful.
The G8 format was in place from 1998-2014, but was reduced to the G7 due to disagreements with Russia regarding the events in Crimea and Ukraine. The G7 has accused Moscow of interfering in Ukraine’s domestic affairs and introduced sanctions against Russia as a result; however, Moscow has rejected the accusations, stressing that Crimea reunited with Russia following a legitimate referendum.

As for the unrest in eastern Ukraine, Moscow has repeatedly stated that it is not a participant in the conflict in Donbass, but one of the four parties of the Normandy format - which also includes Germany, France and Ukraine – and has emphasised Kiev’s reluctance to implement important parts of the Minsk agreements, which include adopting reforms related to the status of the eastern regions.

000000
Popular comments
The world leaders that are supposed to represent there citizens are not listening to them instead they live in the past with their bias attitudes.

Ladyshadow
26 August 2019, 04:25 GMT1
000000
G7 is nothing more than one of the Banksters' meetings telling the participants how to carry out their orders to keep the world running as they demand it. After G7 there is a G20 which is the same old game by the Banksters, next time maybe a G8, all the same. All Illuminati, Bilderbergers thus Globalists and communists. Russia is not the enemy.
dewatergeus
26 August 2019, 15:50 GMT1
000000
Newsfeed
0
New firstOld first
loader
LIVE
Заголовок открываемого материала
Access to the chat has been blocked for violating the rules . You will be able to participate again through:∞. If you do not agree with the blocking, please use the feedback form
The discussion is closed. You can participate in the discussion within 24 hours after the publication of the article.
To participate in the discussion
log in or register
loader
Chats
Заголовок открываемого материала
Worldwide
InternationalEnglishEnglishMundoEspañolSpanish
Europe
DeutschlandDeutschGermanFranceFrançaisFrenchΕλλάδαΕλληνικάGreekItaliaItalianoItalianČeská republikaČeštinaCzechPolskaPolskiPolishСрбиjаСрпскиSerbianLatvijaLatviešuLatvianLietuvaLietuviųLithuanianMoldovaMoldoveneascăMoldavianБеларусьБеларускiBelarusian
Transcaucasia
ԱրմենիաՀայերենArmenianАҧсныАҧсышәалаAbkhazХуссар ИрыстонИронауОssetianსაქართველოქართულიGeorgianAzərbaycanАzərbaycancaAzerbaijani
Middle East
Sputnik عربيArabicArabicTürkiyeTürkçeTurkishSputnik ایرانPersianPersianSputnik افغانستانDariDari
Central Asia
ҚазақстанҚазақ тіліKazakhКыргызстанКыргызчаKyrgyzOʻzbekistonЎзбекчаUzbekТоҷикистонТоҷикӣTajik
East & Southeast Asia
Việt NamTiếng ViệtVietnamese日本日本語Japanese俄罗斯卫星通讯社中文（简体）Chinese (simplified)俄罗斯卫星通讯社中文（繁体）Chinese (traditional)
South America
BrasilPortuguêsPortuguese
NewsfeedBreaking
21:42 GMTSterling’s Drop Worries Investors Over State of Economy
21:30 GMTUS Court Deems Evidence Against Ex-Peruvian President Toledo 'Sufficient' for Extradition - Report
21:18 GMTACLU Chief Apologizes For Changing RBG’s Quote in Favor of ‘Woke’ Lexis - Report
21:17 GMTDPRK Claims Tuesday's Missile Test Was of a New Hypersonic Weapon
21:13 GMTUS Republicans’ Support for Prosecution of January 6 Rioters Plunges 22% - Poll
21:11 GMTTrudeau Says Next Government Will Focus on Vaccine Mandates, Ending Pandemic
21:07 GMTEurozone Faces Supply Bottlenecks, Higher Inflation Amid 'Atypical' Recovery
20:51 GMTUS Tech Stocks Down Most Since March as Inflation, Rate Hike Worry Roil Wall Street
20:37 GMTMessi Scores His First Goal for PSG in Champions League Game Against Man City
20:34 GMTPACE Rapporteur Says 'Horrified' at Reports of CIA's Plans to Kill Assange
20:28 GMTGuaido Responds to Criticism Over Management of Venezuelan Foreign Assets
20:27 GMTNew Court Order Gives Prince Andrew Oct. 29 Deadline to Respond to Giuffre Sex Abuse Case - Report
20:10 GMTObama Breaks Ground on Namesake Presidential Library in Chicago
20:06 GMTBosnian Serb Leader Says Republika Srpska May Form Own Army
19:20 GMTFlorida Governor Ron DeSantis Takes Aim at Biden Administration’s ‘Catch-and-Release' Policy
19:08 GMTElon Musk Ranked Number One as he Surpasses Jeff Bezos on Forbes’ Real Time Billionaires List
19:07 GMTUS Reportedly Didn’t Tell Afghan Army of Plans to Slink Out of Bagram Due to Fear of Taliban Attacks
18:56 GMTSeveral Fireballs Spotted in US Skies – Video
18:53 GMTFrance's Greens Pick EU Parliament Member Jadot as Presidential Candidate
18:51 GMTCould Report on 'CIA Plot' to Kill Assange Help WikiLeaks Founder Evade Extradition to US?