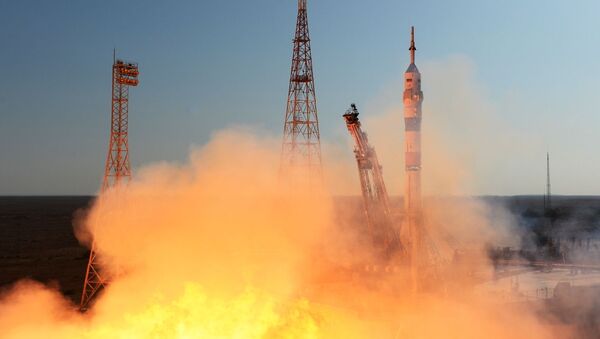 Earlier in the day, the Soyuz MS-14 failed to dock at the ISS on schedule and started retreating from the station. Later, the spacecraft was steered to a safe distance from the ISS. In the wake of the incident, the docking was delayed until Monday, according to the Mission Control Center.

During an attempt to dock with the International Space Station (ISS), the Soyuz MS-14 spacecraft with the FEDOR (Final Experimental Demonstration Object Research) robot inside it made oscillations, the cause of which is unknown, the head of the flight of the Russian segment of the station, cosmonaut Vladimir Solovyov, said.

“Everything was fine until about 200 metres, then we went and redistricted previously unseen fluctuations, and at the mooring stage we realised that we won’t be able to dock automatically,” Solovyov said. The cosmonaut added that the Soyuz MS-14 spacecraft is in automatic flight, and "all [its] equipment is operational."

Subsequently, Roscosmos clarified Soloviev’s words, saying that it was about the oscillations of the manned spacecraft itself, and not about “any unknown magnetic waves”.

According to the portal Spaceflight Now, the Soyuz MS-14  spacecraft's periodic movements from side to side were observed during the broadcast and are associated with the attempt of the ship rendezvous and docking system to fix on the docking node of the Poisk module of the ISS Russian segment. The portal writes that at the same time, Soyuz MS-14 temporarily disappeared from the ISS video monitors, which were used by the Russian ISS cosmonauts (Aleksey Ovchinin and Alexander Skvortsov) in near-Earth orbit to monitor the docking process, which forced the Mission Control Centre in Korolev to ask the crew to attempt to pinpoint the location of the ship through the porthole.

Roscosmos flight controllers suspect that a bad signal amplifier on the station's Kurs rendezvous system may have been the culprit.