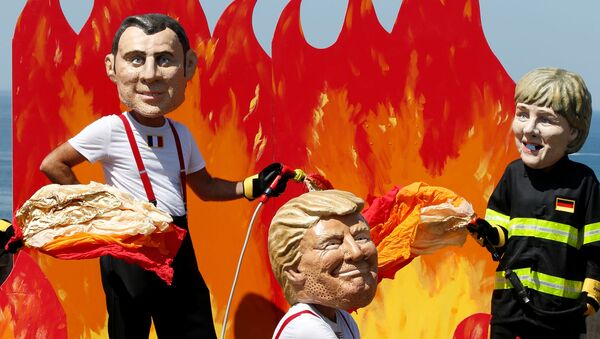 Oleg Burunov
All materialsWrite to the author
The G7 summit in France comes against a backdrop of disputes between the EU and the US, including the two’s standoff over higher tariffs introduced by President Donald Trump last year.

French President Emmanuel Macron has called for launching a fully-fledged reform of the the current international order, including business relationships.

Speaking at a meeting with businessmen in Paris ahead of the G7 summit on Friday, Macron specifically underscored the need for international companies to join efforts to reform the current system. Macron added however that “the model to be developed will by no means mean the termination of the market economy system.”

“That said, one must admit that this model has become rusty as a result of the fact that the democratic system itself has been degraded,” Macron added.

He noted that capitalism had also been degraded and “gone mad because we ourselves generate those manifestations of inequality, which we are then unable to resolve.”

The remarks follow Macron’s criticism of a US business model, which he argued was getting out of “democratic control.”

“The US [… has] a model today which is completely driven by big private actors who are therefore no longer under democratic control, in a way. So there is no longer a government in the US that can guarantee independent, real policies like climate change,” said Macron during a Q&A session at a tech summit in Paris in mid-May.

The G7 summit kicked off in the French resort of Biarritz on Saturday. Speaking at the gathering, European Council President Donald Tusk warned that the summit would be a “difficult test of unity and solidarity” among EU members amid various trade conflicts.

He added that such conflicts have the potential to further damage “already weakened trust” among G7 members, and that the past year has shown that it is “increasingly difficult” for countries to find a common language.

The summit comes as the EU and the US remain at odds over a spate of moves taken by the current US administration, which range  from the withdrawal from the 2015 Iran deal and the re-imposition of sanctions against the Islamic Republic, which has impacted on European companies, to introducing higher import tariffs, which has escalated into a trade rift.

The tariff war broke out in 2018 when President Donald Trump imposed higher taxes on steel and aluminium imports.

With the new measure temporarily suspended, Brussels has worked out a counter-plan to grapple with potential US tariffs on EU cars which stipulates the imposition of extra duties on up to €35 billion ($39.1 billion) worth of US goods.

“We will not accept any managed trade, quotas or voluntary export restraints and, if there were to be tariffs, we would have a rebalancing list,” European Trade Commissioner Cecilia Malmstrom said, voicing hope that the EU does not have to resort to the measure.

PranSa
24 August 2019, 17:25 GMT5
000000
Newsfeed
0
New firstOld first
loader
LIVE
Заголовок открываемого материала
Access to the chat has been blocked for violating the rules . You will be able to participate again through:∞. If you do not agree with the blocking, please use the feedback form
The discussion is closed. You can participate in the discussion within 24 hours after the publication of the article.
To participate in the discussion
log in or register
loader
Chats
Заголовок открываемого материала
Worldwide
InternationalEnglishEnglishMundoEspañolSpanish
Europe
DeutschlandDeutschGermanFranceFrançaisFrenchΕλλάδαΕλληνικάGreekItaliaItalianoItalianČeská republikaČeštinaCzechPolskaPolskiPolishСрбиjаСрпскиSerbianLatvijaLatviešuLatvianLietuvaLietuviųLithuanianMoldovaMoldoveneascăMoldavianБеларусьБеларускiBelarusian
Transcaucasia
ԱրմենիաՀայերենArmenianАҧсныАҧсышәалаAbkhazХуссар ИрыстонИронауОssetianსაქართველოქართულიGeorgianAzərbaycanАzərbaycancaAzerbaijani
Middle East
Sputnik عربيArabicArabicTürkiyeTürkçeTurkishSputnik ایرانPersianPersianSputnik افغانستانDariDari
Central Asia
ҚазақстанҚазақ тіліKazakhКыргызстанКыргызчаKyrgyzOʻzbekistonЎзбекчаUzbekТоҷикистонТоҷикӣTajik
East & Southeast Asia
Việt NamTiếng ViệtVietnamese日本日本語Japanese中国中文Chinese
South America
BrasilPortuguêsPortuguese
NewsfeedBreaking
06:06 GMTQueen Elizabeth II Picks Up Her 'MI6 Anti-Hacker Encrypted' Phone 'for Two People Only'
06:01 GMTFukushima Plant's Operator Starts Surveys to Prepare for Wastewater Dump, Reports Say
05:52 GMT'All Mouth and No Trousers': Boris Johnson 'Fed Up' With Priti Patel Over Migrant Channel Crossings
05:35 GMTFood Prices in Israel Much Higher Than in EU, Here's Why
04:46 GMTCOVID-19 Live Updates: Israel Closes Borders for Two Weeks Over Omicron Strain Fears
03:42 GMTHis Life, His Rules: Biden Spotted With Mask Down on His Chin While Inside Shop
03:28 GMTSouth Africa Laments Travel Restrictions, Calling Them ‘Punishment’ For ‘Excellent Science’
02:57 GMTGhislaine Maxwell Ready to Take Stand at Trial to 'Save Her Own Life' - Report
01:58 GMTMike Tyson Reveals Marijuana Makes Him 'Different Person' as He Launches New Cannabis Line
01:52 GMTConcerns About Spread of New Covid Strain Rise as Another Migrant Caravan Crosses Into US - Report
01:28 GMTMass Theft Occurs at Best Buy Store in Minnesota, Police Say
00:26 GMTTrump Keeps Mt. Rushmore Sculpture With His Face on It on Display in His Office
00:01 GMTA Glimpse of Hope: Biden Approval Rating Climbs 2 Points, But Still Scores Low on Economy - Poll
YesterdayAbbott Says Texas Is Ready For Possible Cold Winter Due to ‘Dozen Laws’ Signed
YesterdayBarnier Says France Has to 'Be Ruthless With the British' Amid Migrant Crisis - Report
YesterdayEx-Labour Leader Corbyn Slams 'Irrational' Suspension From Party One Year On
YesterdaySudanese Army Repels Attack by Ethiopian Troops With Casualties on Both Sides
YesterdayWHO Says No Need for Panic Over Omicron Coronavirus Strain as Much Remains Unknown
YesterdayBiden's First Christmas Tree Will Reportedly Cost Taxpayers $139,000
YesterdayMemes Flood Twitter After WHO Dubs New Covid Strain Omicron