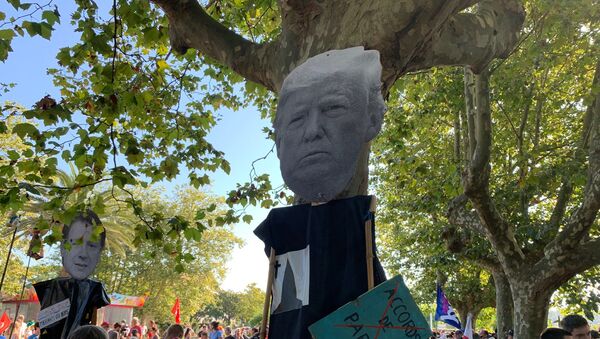 The G7 summit is scheduled to take place in Biarritz, a French resort city, from 24-26 August and bring together the European Union and representatives of the world's seven largest economies, namely Canada, France, Germany, Italy, Japan, the United Kingdom and the United States.

While the official theme of this year’s summit is the fight against inequality and the advancement of universal access to social welfare, the meeting takes places amid a new escalation in the US-China trade war. On Friday, President Donald Trump announced that the US would increase tariffs by another five percent on $550 billion worth of Chinese goods that are already being taxed in response to Beijing's latest retaliatory measures.

French President Emmanuel Macron and his US counterpart Donald Trump have found "major points of convergence" on subjects including trade, Iran's nuclear programme and the wildfires consuming large parts of the Amazon, a French presidency official said Saturday.

The two leaders had an unscheduled two-hour lunch before the opening of the G7 summit in Biarritz, and Macron "created the conditions for a good degree of convergence within the (G7) group, after obtaining clarifications from Donald Trump" on key issues, the official said.

Their talks covered areas of both "agreement and disagreement," the official told reporters on condition of anonymity.

"Despite the fact that the aim of the summit is to formulate global responses to challenges affecting countries worldwide, it is doubtful that the leaders are ready for a constructive consensus. The disagreement between France and USA (followed by UK, Japan and Italy) on the Amazon wildfires consists a sound evidence. It is really oxymoron for USA and its following countries to produce myopic approaches and infantile excuses in their political effort to underestimate the seriousness of this international crisis as the Amazon rainforest produces the 20% of the world’s oxygen.

Nevertheless, more disagreements are expected on the ongoing trade war that USA declared to China. As a result lots of nation-states and their existing trade agreements are subject to revision.

Moreover, the leaders will discuss global policy issues of high relevance on political agendas. For instance, there is an intention to accommodate the participation of major democracies with major regional influence, countries from Africa and civil society. The scope of such a major step or vision is to form synergies in projects and produce solutions to combat all types of inequality more effectively, legitimately and tangibly."

A few hundred people, many of whom have covered their faces with masks and scarves, have been marching though the city, screaming anti-police slogans. The march is occurring in the part of the city surrounded by rivers from both sided, with bridges blocked by the police.

At one of the bridges, protesters began provoking the police, who hosed them four times in response and then fired teargas at the crowd.

The procession is currently repeating its previous route.

Protest Against G7 Summit in Bayonne, France - Video
16:00 GMT 24.08.2019
Trump on Meeting With Macron: Many Good Things Are Happening for Both of Our Countries

Just had lunch with French President @EmmanuelMacron. Many good things are happening for both of our countries. Big weekend with other world leaders! 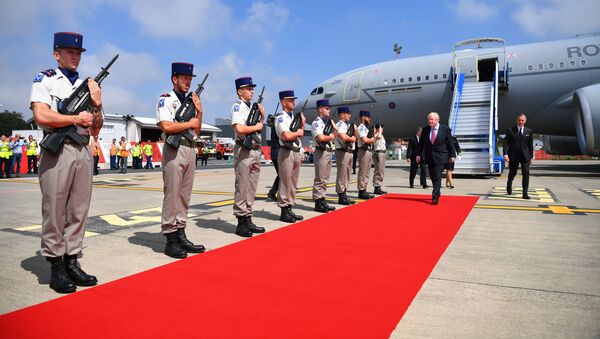 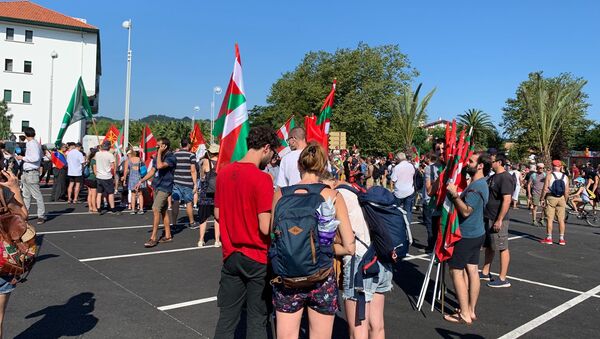 How did lunch come about when Trump wasn’t scheduled to have a formal bilat with Macron?

Per French, Trump got to hotel 2 minutes after Macron arrived from recording his address to nation. He greeted POTUS/Melania and offered lunch to chat about Iran, trade Amazon, Ukraine. pic.twitter.com/CBeOshJI5q

"We must succeed in reaching a de-escalation, stabilise things and avoid this trade war which is already taking place everywhere," Macron said.

"We must find new ways to launch real stimulus, stimulate growth," he added.

According to European Council's President Donald Tusk, the current G7 summit will be "a difficult test of unity and solidarity" after a year during which leaders of the member-states have found it hard to find a common language.

Leaders of the G7 members-states are arriving at the airport of Biarritz for the first days of the group's summit. Japanese Prime Minister Shinzo Abe has become the first leader to arrive for the summit.

Some Nine Thousand People Reportedly Gather in Hendaye, France to Protest Against G7 Summit - Video
08:18 GMT 24.08.2019
Trump Renews Threat to Slap Tariffs on French Wine 'Like They've Never Seen Before' Ahead of G7

EU Vows Response as Trump Threatens to Slap Tariffs on French Wine Amid G7 Summit
Newsfeed
0
New firstOld first
loader
LIVE
Заголовок открываемого материала
Access to the chat has been blocked for violating the rules . You will be able to participate again through:∞. If you do not agree with the blocking, please use the feedback form
The discussion is closed. You can participate in the discussion within 24 hours after the publication of the article.
To participate in the discussion
log in or register
loader
Chats
Заголовок открываемого материала
Worldwide
InternationalEnglishEnglishMundoEspañolSpanish
Europe
DeutschlandDeutschGermanFranceFrançaisFrenchΕλλάδαΕλληνικάGreekItaliaItalianoItalianČeská republikaČeštinaCzechPolskaPolskiPolishСрбиjаСрпскиSerbianLatvijaLatviešuLatvianLietuvaLietuviųLithuanianMoldovaMoldoveneascăMoldavianБеларусьБеларускiBelarusian
Transcaucasia
ԱրմենիաՀայերենArmenianАҧсныАҧсышәалаAbkhazХуссар ИрыстонИронауОssetianსაქართველოქართულიGeorgianAzərbaycanАzərbaycancaAzerbaijani
Middle East
Sputnik عربيArabicArabicTürkiyeTürkçeTurkishSputnik ایرانPersianPersianSputnik افغانستانDariDari
Central Asia
ҚазақстанҚазақ тіліKazakhКыргызстанКыргызчаKyrgyzOʻzbekistonЎзбекчаUzbekТоҷикистонТоҷикӣTajik
East & Southeast Asia
Việt NamTiếng ViệtVietnamese日本日本語Japanese中国中文Chinese
South America
BrasilPortuguêsPortuguese