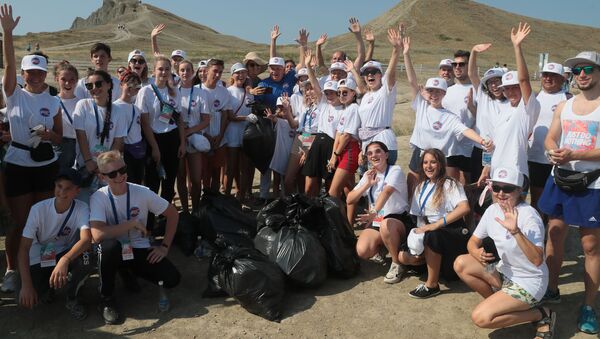 KOKTEBEL (Sputnik) - The international Koktebel Jazz Party festival held a plogging event on Saturday to raise awareness over Crimea’s ecological problems, with dozens of people joining the action that combined jogging and picking up litter in the Tikhaya Bukhta park in the peninsula's resort town of Koktebel, a Sputnik correspondent reported.

The organizers provided the participants with garbage bags and gloves and presented them with festival T-shirts and caps.

Dmitry Kiselev, the Koktebel Jazz Party founder and the director-general of the Rossiya Segodnya International Information Agency, thanked the participants.

"We cannot build wastewater treatment and sanitation facilities [in Koktebel] on our own, but we can show our attitude to all this. We're doing what we can. And let everyone who is in charge to build sewage treatment and sanitation facilities – let them do it in Crimea and turn our beloved Crimea into the cleanest place in Russia and Europe," Kiselev said.

He added that the environmental situation in Koktebel was worsening over the increasing number of people coming to the resort town, while there was still no sewage treatment facility, even though relevant "funds were allocated by Moscow."

"On the one hand, our [plogging] event is a positive action, but on the other, it is a protest against such an attitude to Crimea and Koktebel in particular. Thank you very much, we are together," Kiselev added, addressing the participants.

Plogging originated in Sweden in 2016. The term itself is a combination of the Swedish word "plocka" (pick up) and "jogging."