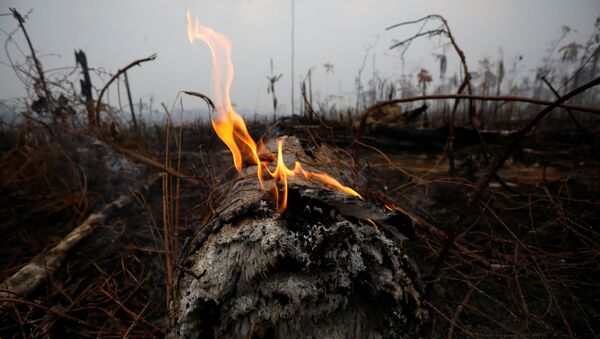 BRUSSELS (Sputnik) - The process of ratifying the EU-Mercosur trade agreement by individual EU member states may be impeded due to Brazil's inaction toward the continuing destruction of the Amazon rainforest, President of the European Council Donald Tusk said Saturday.

"We, of course, stand by the EU-Mercosur agreement, which is also about protecting the climate and environment. But it is hard to imagine a harmonious process of ratification by the European countries as long as the Brazilian government allows for the destruction the green lungs of planet Earth," Tusk said during a press conference ahead of the G7 summit in the French town of Biarritz.

On Friday, Irish Prime Minister Leo Varadkar said that there would be no way that Ireland would vote to ratify the EU-Mercosur trade agreement if Brazil did not honour its environmental commitments and protect the Amazon rainforest.

The trade pact between the European Union and Mercosur bloc, which at the moment comprises Argentina, Brazil, Paraguay and Uruguay, has been under negotiation for almost 20 years. In late June, the blocs agreed on the terms of the deal with the aim of enhancing economic cooperation and boosting sustainable growth.

Once ratified by all individual member states and in force, the deal will eliminate the majority of tariffs between the two blocs by establishing a free trade area.

Currently, the Amazon rainforest, which produces about 20 percent of the Earth's atmosphere's oxygen, is burning from wildfires at a record rate and has drawn international attention. Environmental activists have been staging protests at Brazilian embassies worldwide and accusing Brazilian President Jair Bolsonaro of supporting farmers who are burning the rainforest to expand farming land.