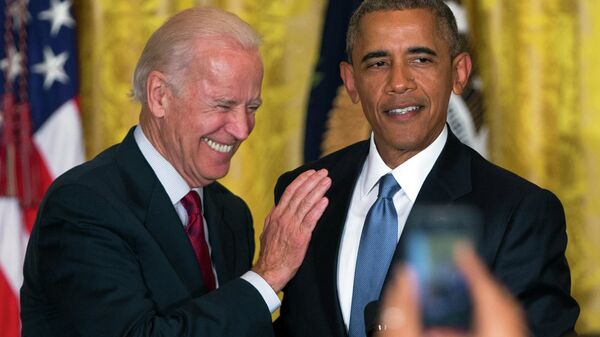 Former Vice President and Democratic frontrunner Joe Biden surprised the attendees at a town hall in New Hampshire on Friday when he asked to imagine if former President Obama had been assassinated.

The remark at the event, which was billed as focused on health care, came while Biden was talking about his political heroes, Robert F. Kennedy and Martin Luther King Jr., according to NBC News’s Mike Memoli, who was in attendance.

"My senior semester, they were both shot and killed," Biden said. "Imagine what would have happened if, God forbid, if Barack Obama had been assassinated after becoming the de facto nominee. What would've happened in America?"

Ironically, Biden’s question came on the day of the 11th anniversary of Obama’s announcement of Biden as his running mate in the 2008 race. Biden is currently the front-runner in the crowded Democratic presidential primary. He has often worked on the campaign trail to highlight his political and personal relationship with Obama, who remains widely popular within the party.

This is not the first time the ex-Vice President has raised eyebrows during his campaign. He has been under scrutiny from the press in recent weeks amid a series of gaffes, including misstating the decade in which King and Kennedy were killed, saying he preferred “truth over facts” and that “poor kids” are “just as talented as white kids,” before correcting himself and saying “wealthy kids.”