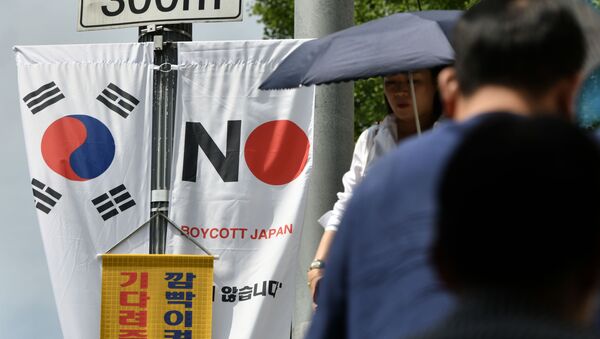 Earlier, Prime Minister Shinzo Abe said that Japan still expects South Korea to keep its promises on the contentious issue of wartime forced labour and to work to rebuild trust after South Korea's decision to scrap a deal to share military intelligence.

According to Kim Hyun-chong, a deputy national adviser to the 'Blue House' (South Korea's presidential administration), Seoul will share intelligence with Japan through a three-way channel involving the United States.

A senior official said that the decision to end the intelligence-sharing deal with Japan was unavoidable as it had "ignored" Seoul's constant offers of dialogue to resolve a row over wartime Korean forced labourers.

Known as the General Security of Military Information Agreement (GSOMIA), the pact was signed in 2016 and was due to be automatically renewed on 24 August. It regulated the sharing of intelligence data about North Korea's nuclear activities and also China's growing military capabilities.

Relations between the East Asian neighbours began to deteriorate late last year following a South Korean Supreme Court order that Japanese companies must provide compensation to victims of forced labour during the Japanese colonisation of the Korean Peninsula between 1910-1945. Japan condemned the ruling, saying the matter was resolved by a 1965 treaty normalising ties.