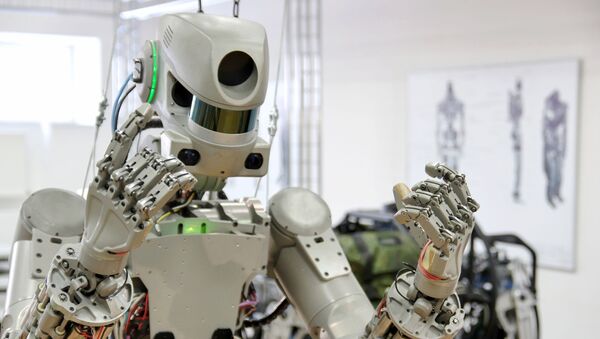 BEIJING (Sputnik) - Russia's humanoid robot Fedor might fly into orbit again and enter outer space for the first time "much earlier" than the planned year of 2021, the chief designer of the Android Technics Scientific Production Association, Alexei Bogdanov said.

"The dynamics of the issues that are being worked out by [Russian State Space Corporation] Roscosmos has increased significantly, and I do not exclude that this may happen much earlier," Bogdanov said, answering a question as to whether the robot would again fly to into orbit in 2021.

At the same time, the chief designer said that it would not be the same robot that was launched on August 22, but rather a modification of the current version.

Bogdanov also noted that the robot would operate the first flights of Russia's new manned Federatsiya spacecraft, which are planned to take place in 2022.

On Thursday, Fedor was successfully launched into space inside the Soyuz MS-14 vehicle atop the Soyuz-2.1a carrier rocket from the Baikonur Cosmodrome. The robot, controlled by Russian cosmonaut Alexander Skvortsov with the help of a special suit that reads the operator’s movements, will carry out several tasks at the International Space Station. Fedor is scheduled to return on September 7.