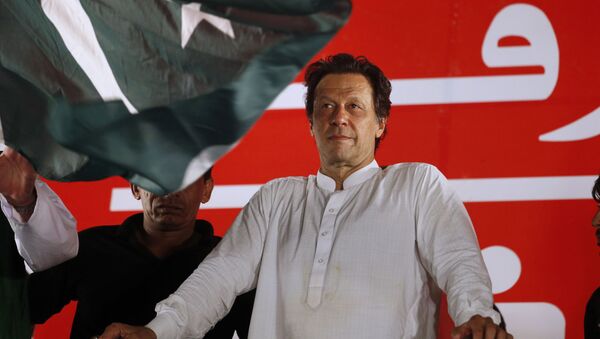 "I want to warn the international community that the Indian leadership will in all probability attempt a false flag operation to divert attention from its massive human rights violations and the unleashing of a reign of terror in Jammu & Kashmir," Khan tweeted.

Explaining his suspicions, Khan mentioned Indian media reports which have claimed that "some terrorists from Afghanistan" have entered Kashmir to undertake terrorist activities, while others have entered India's southern regions.

We are hearing Indian media claims that some terrorists from Afghanistan have entered IOJK for terrorist activities, while others have entered India's southern regions. These claims are predictable to divert attention from India's ethnic cleansing & genocide agenda in IOJK.

​Indian officials have yet to comment on the Pakistani prime minister's accusations.

At the same time, citing intelligence officials, Indian news agency PTI reported that Pakistan was allegedly planning to push 100 terrorists from Afghanistan into Kashmir to carry out attacks as part of its "larger design" to create unrest in the Valley. Around 15 Jaish-e-Mohammad terrorists are waiting at the terror launch-pads in Lipa Valley along the Line of Control on the Pakistani side to infiltrate in Kashmir, the report claimed.

In February this year, the Indian Air Force (IAF) carried out an aerial strike involving over half a dozen Mirage fighter jets to destroy alleged terrorist training camps inside Pakistan, near the town of Balakot.

The operation was carried out in retaliation for a suicide bombing carried out by Jaish-e-Mohammed (JeM) in which at least 40 Indian soldiers were killed in the Pulwama district of Jammu and Kashmir on 14 February. The following day, Pakistan retaliated and shot down one Indian fighter jet.

Khan, last week, warned the global community that it must seriously consider the safety and the security of India's arsenal amid New Delhi's latest pledge to review its nuclear doctrine.

Tensions between India and Pakistan escalated earlier in the month after India announced its decision to amend Article 370 and 35A of the Constitution, repealing the special status of the Jammu and Kashmir region, and dividing the territory into two federally administered enclaves - Jammu and Kashmir and Ladakh.

Earlier this month, the United Nations Security Council at the request of China discussed the Kashmir issue in a closed door meeting but with no discernible result.