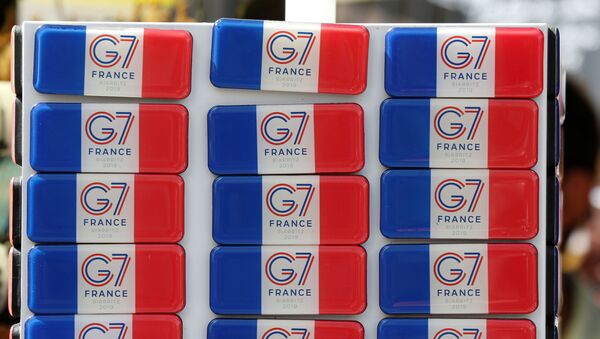 GENOA (Sputnik) - Inviting Russia back to the Group of Seven industrialized nations would be an important development as it would make the G7 more inclusive, Michele Geraci, the undersecretary of state for the Italian Ministry of Economic Development, said.

"Bringing Russia back to the family of this club will be a very important development and make it more inclusive. Actually, that was the reason why we went from G7 to G20 — to include other countries who were not part of the ‘elite club.’ We do not want to be an elite club, we want to be inclusive," Geraci said.

The European Union is against readmitting Russia until it addresses the issues that led to its exclusion back in 2014, a high-ranking source in EU institutions told reporters in Brussels on Thursday. At the same time, France has invited Australia, India, Chile, South Africa and four other African nations to the talks.

"It is quite normal to have extra participants; it happens also with G20… Also, of course, China is now the second biggest economy, so of course without China the G7 does not represent the richest countries," Geraci argued.

US President Donald Trump said Tuesday that Russia should return to what used to be G8. His French counterpart, Emmanuel Macron, who is hosting the annual G7 summit this week, suggested that Russia be invited when the United States chairs it in 2020. Russian President Vladimir Putin said this week that his country saw any form of dialogue with G7 nations as useful.

The G7 is made up of Canada, France, Germany, Italy, Japan, the United Kingdom and the United States. Their summit will take place in the southwestern French resort of Biarritz from August 24-26. The main topic of this year’s summit will be the fight against inequality and advancement of the universal access to social welfare.

Italy to Attend G7 Despite Political Crisis at Home

The governmental crisis in Italy will not stop it from turning up for the G7 summit, Michele Geraci said.

"I do not think it can affect [G7 attendance] at all, we will participate in the summit. It is common that sometimes during big international summits some of the participants may have their own internal issues. Long-term issues, however, are on the table and do not depend on temporary crisis," Geraci said.

Italy wants to focus on Brexit and global trade order at the summit, the official said. It will be held in the southwestern French town of Biarritz from August 24-26.

"We have a number of priority topics — for example, Brexit is one of the important ones, because we need to raise at the European level this trade issue and wider, on a more global basis, the trade tensions, and try to re-establish order in the WTO," he said.

Geraci said he had discussed some of these issues at the G20 in Argentina last year and during this year’s G20 ministerial on trade and digital economy in Japan.

"I think now it is another opportunity within a closer group to try to agree on what should be the new order of trade. Because this has always been a hot topic for the last two years, with a limited progress," he added.

Geraci admitted that he had always had doubts about the United Kingdom breaking away from the European Union. He said Italy wanted to know how London planned to resolve the Irish border issue, arguably a far more contentious problem than the future of the UK-EU trade or freedom of movement.

"The UK alone cannot leave the European Union while Ireland stays ... So either Ireland and the UK both leave, which is obviously not the case, or the UK does not leave, or the UK leaves, and there will be a border between Northern Ireland and the Republic of Ireland, and this is not acceptable. So we want to know what is endangered and what the UK has to propose on the Ireland issue," he said.

Italy’s shaky coalition collapsed on Tuesday after Prime Minister Giuseppe Conte quit citing differences between the right-wing League and the anti-establishment Five Star Movement. The League leader and deputy prime minister, Matteo Salvini, has been calling for a snap election.

Another topic that Italy wants to raise at the summit is the 5G high-speed Internet network. Italy has allowed China’s technology giant Huawei to participate in the project, resisting pressure from the United States which has been warning EU nations of potential spying by China, despite no evidence.

Geraci said that the 5G technology was important — but so was an informed assessment of threats and opportunities it came with. He said it was therefore important to have discussions on the topic and "bring facts in the center of the analysis" because "decisions of individual states will affect others."

EU Has Less Flexibility Than US in Rebalancing Trade With China

The European Union cannot replicate the "aggressive" US attempts to fix the trade imbalance with China despite having the same goal as Washington, Michele Geraci stressed.

Europe moved this year to reshape its economic ties with China, the biggest importer of its goods and a major investor in crucial EU infrastructure, after the growing presence of Chinese business prompted fears of a takeover. The United States has been meanwhile increasing tariff barriers for billions of Chinese imports.

"The US has much more flexibility: Trump almost unilaterally decided on tariffs, but in the case of the European Union you need to agree at the Commission level, we have a limited flexibility, we are not so quick at responding, it would take 6 months if we want to respond to someone’s activities," Geraci pointed out.

China has responded to US duties with taxes of its own, sparking fears of a trade war that would hurt the two powerhouses and slow down the global economic growth. The two have imposed several rounds of tit-for-tat tariffs since June 2018 and have yet to negotiate a comprehensive trade deal. But the Italian deputy minister downplayed the risk of a full-scale trade war.

"I think this is the new normal. The US and China will need time to re-establish common ground for their relationship. I don’t think there will be a trade war, and I do not think trade will suffer a lot," Geraci said.

EU and US trade relations with China are expected to be on the agenda at the summit of the Group of Seven most industrialized nations in the French town of Biarritz from August 24-26, where two sides to the trade spat — the United States and four core European nations — will be present.

US President Donald Trump’s renewed threat to pull his country out of the World Trade Organization (WTO) should be considered as "negotiating tactics" ahead of the G7 summit, Geraci said.

"They put the threat that they leave on the table and then they see what comes out of this meeting. But Trump sometimes threatens some action, and then this action is never done. So I think this is a negotiating tactic that brings attention to the topic. G7 in France will talk a lot about that," Geraci said.

He said that the problem with the WTO was that its rules were outlined before Asia became the fastest growing economic region. Trump directed Trade Representative Robert Lighthizer last month to secure changes to these rules to prevent developing countries from taking advantage of regulatory loopholes.

"The problem with WTO is that the rules were not designed to deal with high economic growth and emergence of Asia, specifically China. It was designed to make sure that there are no [price] dumping situations for smaller countries," he added.

China, the world's second largest economy, has been identified by the United States as the biggest abuser of WTO rules. Since joining the WTO, China has insisted that it is a developing country, according to a White House memorandum.

"I think the solution goes back to trade tensions with China. I think the United States may want to take a little bit of time," Geraci said.

Discussions about reforming the WTO have been going on for years and the organization's 164 member states are yet to reach a consensus on the matter. The members are divided in two camps, with one group of states — including Russia — advocating for the organization's further development and another calling for developing a new format for the WTO.

Trump reiterated last week that the United States might pull out of the WTO, following what he claimed were years of mistreatment at the hands of the organization.