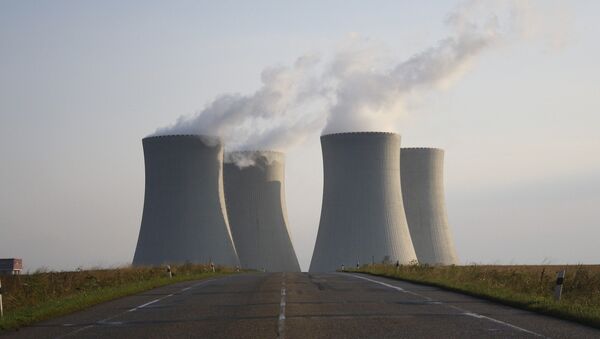 New Delhi (Sputnik): Bilateral civil nuclear cooperation between India and France will move to the next level by the end of 2019, Indian Prime Minister Narendra Modi and French President Emmanuel Macron have suggested in separate statements following their Paris meeting.

Both leaders have admitted being satisfied to see negotiations related to a critical civil nuclear project in India's Maharashtra state making progress.

"France is the first country with which we have signed a new generation civil nuclear agreement. We have urged our companies to move forward on the Jaitapur project in Maharashtra rapidly, and also keep in mind the price of electricity," said Prime Minister Modi on Thursday.

President Macron also hinted about upcoming "significant decisions" saying: "If we talk about bilateral civil nuclear cooperation between France and India, by the end of this year, we are going to make some crucial and significant decisions with regard to the nuclear power project in Jaitapur, India."

"Both France and India are in the final stages of negotiations regarding this particular project, and we intend to do something substantially and very quickly," he added.

India is aiming to produce 40 per cent of its electricity from non-fossil fuels by 2030, in keeping with its commitment made at the Paris Climate Conference.

This April, French utility major Électricité de France S.A.(EDF), was contracted to build reactors for the nuclear power plant in Jaitapur, Maharashtra, said India must provide a sovereign guarantee to two French state-run financial firms -BPI France and SFIL to secure financial assistance for the project. India is yet to respond to the offer.

The EDF will build India's largest nuclear power park, comprising of six atomic power reactors with 1,650 megawatts of power each, for a total of 9,600 megawatts.

The company submitted a techno-commercial offer to the Indian state-run and owned Nuclear Power Corporation of India (NPCIL) in December 2018. The NPCIL operates over 20 nuclear reactors in India.

In December 2018, France and India reviewed the status of the European Pressurised Reactor (EPR) project in Jaitapur and adopted an action plan to efficiently arrive at a final decision for building the power plant.

"Six EPRs account for a total capacity of almost 10 GW, which is a significant contribution to India's aim of producing 40 per cent of its electricity from non-fossil fuels by 2030, in keeping with its commitments made ahead of the Paris Climate Conference," French Minister for Europe and Foreign Affairs, said Jean-Yves Le Drian.

India and France signed the agreement to build the nuclear power plant in Jaitapur, located some 600 km south of Mumbai, in 2008.