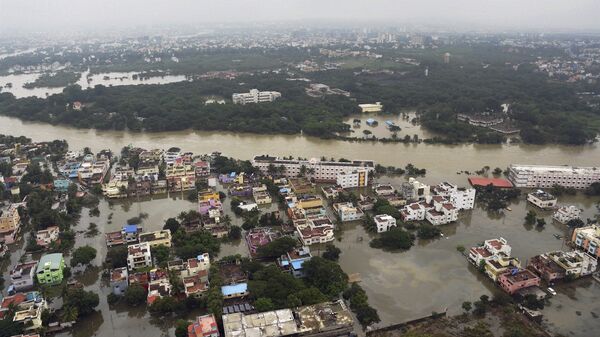 New Delhi (Sputnik): A helicopter involved in flood relief operations in the Himalayan state of Uttarakhand in India crashed on Friday afternoon. No casualties were reported.

It was the second crash since Wednesday in the Uttarakashi area of Uttarakhand which has been witnessing severe floods and that lead to at least 15 people deaths in the past few days.

#NewsAlert – A helicopter crash-landed in Tikochi area of Uttarkashi, Uttarakhand today. No casualties have been reported in the incident. pic.twitter.com/yDHrRFN9Ml

Ashish Chauhan, a senior administrative official in Uttarkashi, confirmed both that crew members on board survived with minor injuries.

The civilian helicopter, belonging to Aryan aviation, made the landing on the banks of a river when it was returning after transporting relief supplies to Tikochi Village in disaster-hit Uttarkashi.

​On Wednesday, another helicopter owned by private aviation company Heritage Aviation crashed in Uttarakashi after coming in contact with a power cable, leaving all three aboard the copter dead.

​According to government data, Uttarakhand is the worst-hit in terms of numbers of victims, with 32 deaths over the past few days. Heavy rainfall in these regions has led to numerous landslides and caused rivers to overflow.