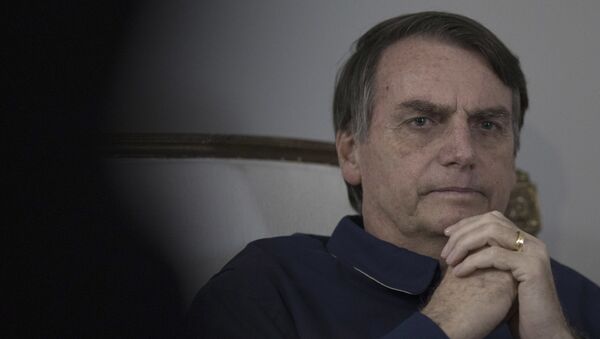 Bolsonaro said that the government is aware of Amazon fires and is taking actions to try to contain them.

In a televised address Brazilian president Jair Bolsonaro said that above-average temperatures and dry weather have led to the fires in Amazon states, adding that he had authorized use of federal troops and equipment to fight the fires.

Serious wildfires have been making their way through the Amazon for three weeks now. According to satellite data provided by the Brazilian National Institute for Space Research (INPE), there has been an over 80 percent increase in the number of wildfires between this year and last year, which is an unprecedented rate.

Brazil’s pro-business President Jair Bolsonaro has been blamed for emboldening farmers and loggers in Amazonia to set fires to the forest, the planet’s carbon dump, to clear the land for exploitation.

Among his disputable decisions was the sacking of Ricardo Galvao, the head of INPE, earlier this month, who accused Bolsonaro's government of increasing the pace of deforestation in the Amazon region.

Previously, French President Emmanuel Macon took to Twitter to warn that "our house is burning." He stressed that rainforests produced 20 percent of the oxygen and were considered the lungs of the Earth. Macron also said earlier that Bolsonaro appeared to have lied to him at the Osaka summit about the environmental policies aimed at containing the deforestation. He also urged the G7 leaders on Thursday to discuss the issue at the upcoming summit in the French resort city of Biarritz taking place from August 24-26.