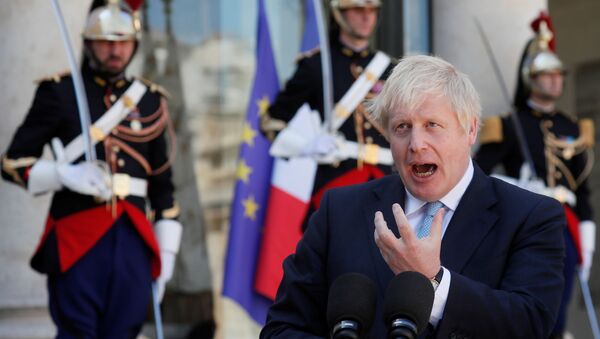 Boris Johnson became the British Prime Minister on 24 July, replacing Theresa May, and said he intended to implement Brexit before 31 October. He said he wanted to renegotiate the deal but said if necessary he would leave without a deal.

Boris Johnson has returned from a tour of Europe, where he tried to persuade key European Union leaders to accept a renegotiation of the deal they offered his predecessor last year, which included the infamous Irish “backstop”.

The talks were held behind closed doors and the British government has not released details of what was discussed.

But what do we know about the ‘European tour’?

I met President Macron in Paris today and was in Berlin last night to meet Chancellor Merkel.

Both of them, of course, are crucial friends and partners of the UK. pic.twitter.com/1FtTTpOrnn

​On Wednesday, 21 August, Mr Johnson was given a formal guard of honour by the German Army on his arrival in Berlin, before holding private talks with the Chancellor, Angela Merkel.

At a press conference afterwards Mrs Merkel said an alternative to the backstop could be found within 30 days.

She said the onus was on the British government to come up with a fresh proposal but she said there was “ample scope” for a new deal.

Mr Johnson said he was "more than happy" with what had been agreed, but admitted it was a "blistering timetable."

He said: "I admire that 'can do' spirit that she seemed to have.”

On Thursday, while in the Netherlands, Mrs Merkel clarified her remarks and said Britain had right up until 31 October to find a solution to the border issue.

Merkel and Macron have sent Johnson to the store room to ask for a long stand pic.twitter.com/x2YUUJkyxL

​But on Thursday, 22 August, Mr Johnson arrived in Paris and there was a palpably more hostile attitude emanating from the Élysée Palace.

French President Emmanuel Macron said he would be willing to hold further talks about Brexit to avoid the UK crashing out without a deal but said there could be no major concessions. He said the Irish backstop was "indispensible" and said any negotiations had to be based on the withdrawal deal negotiated by Theresa May and her then Brexit Secretary, Dominic Raab, who is now the Foreign Secretary.

U.K. PM about to land on French shores... here’s how Boris Johnson is depicted by KAK on the front page of ⁦@lopinion_fr⁩ The way Merkel and Macron are depicted isn’t bad either #Brexit #UK #Macron #France #Merkel #Germany #EU pic.twitter.com/tKsAmjjLrS

​Mr Macron said: "We need to try to have a useful month.”

But he said France was already putting in place plans for a “no deal” scenario.

Mr Johnson said solutions were "readily available" to prevent border checkpoints being required on the border between Northern Ireland and the Republic of Ireland, a prospect which would be sure to lead to a resurgence of militant Irish republicanism.

Mr Macron said the backstop provided "indispensible guarantees to preserve stability in Ireland and the integrity of the single market.”

But the backstop is one of the major reasons why Mrs May’s withdrawal deal has failed to make it through the British Parliament and has been called "anti-democratic" by Mr Johnson because it will require London to keep its regulations synchronised with the EU during a transitional period.

Mr Johnson said: "Let's get Brexit done, let's get it done sensibly and pragmatically in the interests of both sides.”

Mr Johnson’s tour of European capitals boosted the financial markets, where the pound rose by up to one percent against the dollar and euro.

But the ball is very definitely in Mr Johnson’s court and he must somehow come up with an alternative to the Irish backstop.

Conservative MP Greg Hands, co-chair of think tank Prosperity UK's Alternative Arrangements Commission, said there were a series of "administrative and technological measures" which could avoid the hard border but retain the sanctity of the single market.