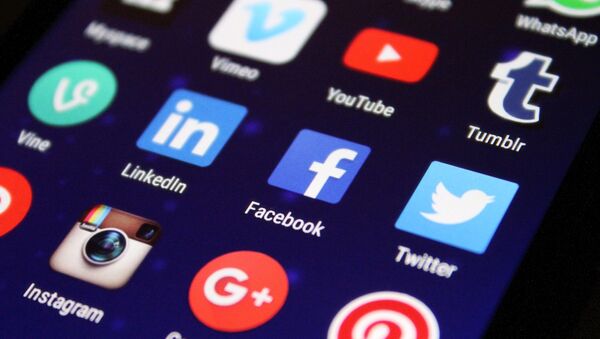 In the last week, social media giants moved to silence critics of the anti-Beijing protests in Hong Kong, disabling thousands of accounts, pages and channels by claiming they’re promoting “disinformation” and “sowing discord.” But the move is deeply hypocritical, a technologist told Sputnik, because these companies do the same thing constantly.

Since Monday, Facebook, Twitter and Google have between them disabled hundreds of thousands of accounts judged to be behaving “in a coordinated manner,” as Google said, and “deliberately and specifically attempting to sow political discord in Hong Kong, including undermining the legitimacy and political positions of the protest movement on the ground,” as Twitter put it. The three tech giants noted they each relied on tips from the others and that their reasoning was identical.

“‘In a coordinated manner,’ or all these phrases that Twitter, Facebook and Google use - ‘inauthentic coordinated behavior’ - they mean whatever those companies want it to mean,” web developer and technologist Chris Garaffa told Radio Sputnik’s By Any Means Necessary Friday. “They mean absolutely nothing to the rest of us.”

“These companies are doing the bidding of the US State Department and, in general, of Western capitalism. Their previous targets have been Russian accounts, they have been Iranian accounts, they have been Venezuelan accounts,” he noted. “And also, independent accounts and news sources that report a different perspective than the mainstream Western-spaced narrative. I mean, Google has delisted RT and Sputnik from news results. Facebook and Twitter have taken down the pages of VenezuelAnalysis and, at one point, TeleSUR English, even. Those, thankfully, have been reinstated after mass outrage.”

“Even if these accounts were being planned and coordinated with their tweets and their posts, it’s absolutely hypocritical, because the US does the same thing through Voice of America and other agencies; through the National Endowment for Democracy they do that. The Israel Defense Forces have an entire social media operations wing where they have people do the same thing whenever there’s news about Israel. They actually go out and basically combat anything they see as negative about Israel.”

“First of all, we have to consider the fact that we’re giving all these companies - or, these companies have this absolute free reign to shut down accounts and to do all of these things. They’re private companies,” Garaffa noted. “They are beholden to shareholders, but they are also beholden to the interests of capital, and so is the US government as the executive, so to say, of the capitalist market.”

The technologist said our consciousness “is absolutely being manipulated” by our use of these sites.

“There are many, many studies showing how just what the results from a Google search can do to an election. You want to talk about election interference, let’s talk about the way Google manipulated search results, or the way Facebook will show you what it thinks you want to see, even if those stories are absolutely fake. They often create echo chambers,” Garaffa explained.