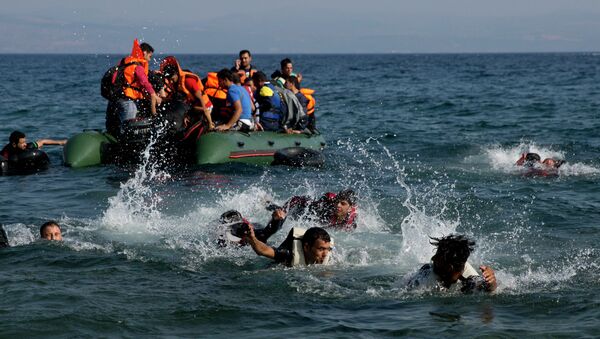 As frustration in the UK over the government’s apparent obtuseness in dealing with the number of migrants crossing the English Channel grows, London is turning to Paris in the hopes that the flow can be stemmed before more groups of migrants attempt the dangerous voyage.

UK Home Secretary Priti Patel is reportedly due to hold emergency talks with her French counterpart over the surge in migrants attempting to make the perilous journey over the English Channel to reach British shores.

The announcement comes hot on the heels of four separate incidents that occurred off the south coast of the UK on Thursday, 22 August, in which a total of 37 people tried to make it across the freezing English Channel in small rubber boats and dinghies. Reportedly, the group included six small children.

Wonder what Priti Patel is expecting France to do about the volume of migrants crossing the Channel. I mean if only we had a really close relationship, like be part of the same union or something.... Oh damn, wait a minute.. Didn't we just.. Oh dear

They are not rescued they were stopped illegally trying to enter the country, kick em back to France.

​Coincidentally, the attempted crossings came on the same day that figures were released on immigration from the EU to the UK, which revealed that in the year ending March 2019, 612,000 people moved to Britain from the bloc.

“Since January [2019] we have returned more than 65 people who arrived illegally in small boats. We continue to monitor the ongoing situation and are working closely at all levels with French authorities on the issue,” a Home Office Spokeswoman has been widely quoted as saying.

The spokeswoman added that those people, particularly families with small children, trying to make the risk-fraught voyage are taking a “huge risk” also saying in reference to smugglers that, “the criminals gangs who perpetuate this are ruthless and do not care about loss of life.”

When is Priti Patel going to do her job. We do not want to be responsible or pay for illegal migrants refusing to claim asylum in the first safe country. We urge Priti Patel to exercise the power of her office to put an end to migrants selecting the country of choice for asylum.

​In the early hours of the morning on Thursday, the UK Border Force flagged a small vessel sailing across the English Channel toward Britain. Reports say that a total of eight men and one woman were aboard, all of whom were allegedly from Iran. Then, later on Thursday morning, the Border Force’s alarms were reportedly sounded again, following which another small boat was intercepted, this time containing a group of 11 men. The individuals on this boat were said to be from Iran, Kuwait, Guinea and the Ivory Coast, highlighting the increasing number of nationalities making the dangerous journey across the channel.

Not long ago, these incidents alone would have been considered an abnormally busy morning for the UK Border Force. Yet, in these times of increasing refugee movement and displacement - which are, according to the UN, at the highest number on record - the number of attempted crossings continued throughout the day.

Surely rescuing and bringing these illegal immigrants here is as bad as the people traffickers.
Home Office/ Border agency - Guilty!

Just two hours after the second incident mentioned above, six men, all of whom allegedly claimed to be Iranian, were intercepted in a small rubber boat. Then, at 11:30am, the Coast Guard was deployed for a fourth time to seize a vessel with another 11 people on board, all of whom, again, reportedly claimed to be Iranian. Four of those aboard were also said to have been children.