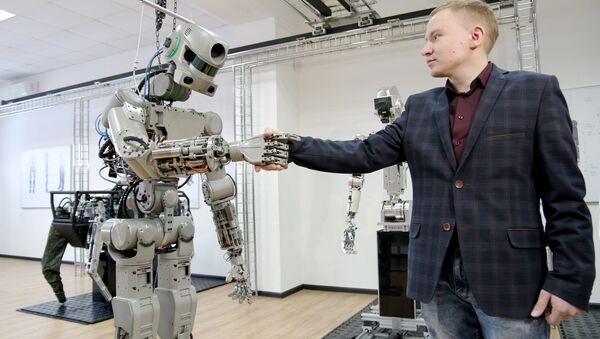 MOSCOW (Sputnik) - Russia's humanoid robot Fedor was successfully launched into space inside the Soyuz MS-14 vehicle atop the Soyuz-2.1a carrier rocket from the Baikonur Cosmodrome on Thursday, the webcast on the Roscosmos website showed.

During the launch, Fedor said the legendary "Let's Go!" phrase, which Yuri Gagarin, the first human to travel to space, said during his historic launch on April 12, 1961, the webcast has shown.

Approximately eight minutes after the launch, Soyuz MS-14 was placed into the orbit, according to the webcast.

The spacecraft is now to fly to the International Space Station under the two-day scheme. It is expected to dock to the station at 08:30 Moscow time on Saturday.

Notably, during the launch, Roscosmos tested an emergency rescue system of Soyuz MS-14. The spacecraft was launched for an unmanned mission for testing interoperation between it and the new Soyuz-2.1a carrier for the first time ahead of future manned mission launches.