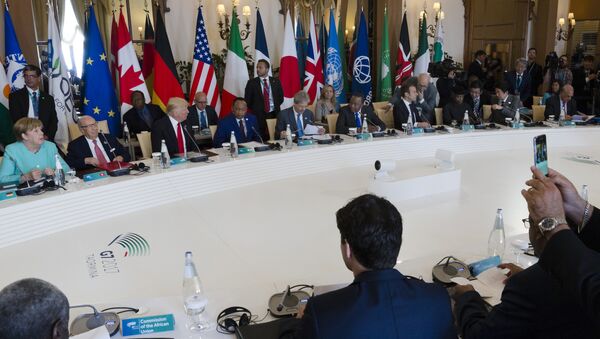 PYATIGORSK (Sputnik) - Russia was uninvited from G8 summits in 2014 after Crimea's reunification with Russia. This happened despite Moscow repeatedly stressing the referendum was held in accordance with international law.

The G7, a group comprising the world's seven leading economies, needs to form a consensus regarding whether Russia should rejoin the group and then send it an official invitation, the spokeswoman for the Russian Foreign Ministry said Thursday.

"If the G7 countries want to use this opportunity for dialogue with Russia, if this is what they want, they should frame it accordingly … submit to Russia for consideration. It requires a consolidated position", Maria Zakharova told reporters.

US President Donald Trump said Tuesday that Russia should return to what used to be G8. His French counterpart, Emmanuel Macron, whose country is hosting the annual G7 summit this week, suggested that Russia be invited to the group when the United States chairs it in 2020. Russian President Vladimir Putin said this week that his country saw any form of dialogue with G7 nations as useful.

The G8 format was established in 1998 but was reduced to G7 after Russia was expelled in 2014 due to being accused of meddling in Ukraine's internal affairs in the wake of Crimea's decision to rejoin Russia and the eruption of the military conflict in the eastern Ukrainian region of Donbas. Russia has refuted the accusations, stressing that Crimea rejoined it following a legitimate referendum.

The G7 is now composed of the United States, Germany, Japan, the United Kingdom, France, Italy and Canada. Its annual summit will be held in Biarritz from August 24-26.