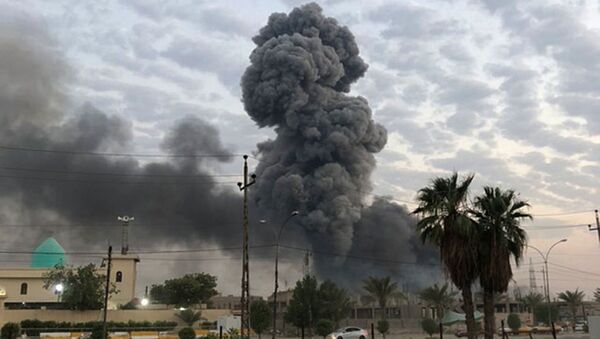 BAGHDAD (Sputnik) - An alleged Israeli airstrike on an ammunition depot in the Iraqi capital of Baghdad, belonging to the Iran-backed Popular Mobilization Forces (PMF), is a declaration of war against Iraq, and Baghdad should openly respond to violations of its sovereignty, Iraqi lawmaker and a PMF official, Ahmed Asadi, said on Thursday.

"Israel's intervention into the sphere of our national interests is a declaration of war against Iraq, its people, sovereignty. The silence on the aggression is not a rational position ... We must take measures at the regional and international levels to resist the destruction of our airspace and military capabilities," Asadi said in a statement.

He added that Iraq may respond to Israeli actions, since "they wanted an open war, and our national duty is to stop this war in the form of an open response."

The remarks came after a blast hit the ammo depot in Baghdad on Monday, killing one civilian and leaving dozens of others injured. Though the causes of the explosion remain unknown, the incident has given rise to a number of theories, including that Israel might have been behind the airstrike. These explosions at the facilities, which belong to Iran-backed militias, are fueling speculations that Iraq is gradually being sucked into the escalating tensions between Washington and Tehran.

The United States and Israel did not provide any official comments in this regard, but the Israeli prime minister said on Monday "Iran has no immunity, anywhere," adding that actions against Tehran continued wherever it was necessary.