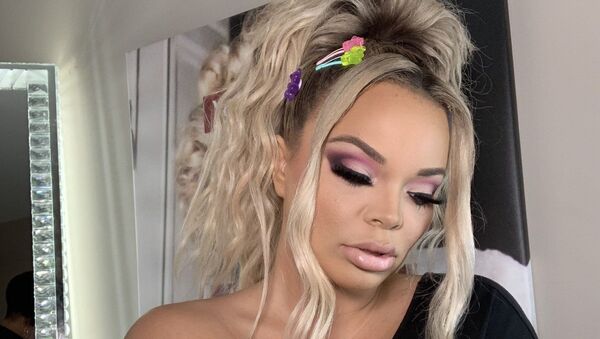 © Photo : Instagram/trishapaytas
Subscribe
This was the 31-year-old blonde's second breast surgery operation in two years; Paytas is known for her sitting-on-the-kitchen-floor confessions and nervous breakdowns. The revelation drew particular interest from fans and haters alike.

Trisha Paytas, a popular US vlogger, has taken to Instagram to spread the word about her seemingly unsuccessful breast augmentation to her 2.5 million fans.

Paytas, 31, who runs a daily lifestyle-oriented YouTube vlog and is pursuing a music career, has always been vocal about her personal issues.

Now, she plans on monetising them.

On Sunday, she posted a censored before-and-after collage, saying that her uncut “plastic surgery botched story” was available for a fee on her Patreon account, where she posts adult content for her more lascivious fans.

MY PLASTIC SURGERY BOTCHED STORY IS UP NOW ON TRISHYLAND.COM 🙈🙈 with uncensored photos of my natural boobs , first boob job and the current situation 😭😭

Questions about Paytas’s breast surgery emerged last week, after she tweeted what was supposed to be a seductive video of herself undressing on a bed, only to expose apparently misplaced nipples and scarring from surgical incision.

The comments were quickly inundated by trolls mocking her mishap.

“Your plastic surgeon did the same thing to your tits that my genetics did to my legs,” wrote disabled comedian Ricky Berwick.

Honest TeamYouTube, a parody account pretending to address YouTubers on behalf of the platform, thanked Paytas for “being so brave to show your subscribers what can happen when surgeries go wrong.”

Thank you Trisha for being so brave to show your subscribers what can happen when surgeries go wrong.

It’s always very important to carefully choose the right clinic/hospital and surgeon and never ever trying to save money.

“When you get a boob job on Groupon,” another user quipped.

When you get a boob job on Groupon

Trisha Paytas, who has featured in reality shows Celebrity Big Brother and The Reality House,  had already had breast surgery back in 2017; the operation appeared to go down much better than the latest surgical procedure.

She shared a before-and-after photo in February 2017 saying that she was “happy” with the results.

“I'm always super honest about the work I've had done. I'm all about loving yourself but I'm also a firm believer, if you're unhappy with something , fix it!” she wrote at the time.

Before/After boob job. I'm always super honest about the work I've had done. I'm all about loving yourself but I'm also a firm believer, if you're unhappy with something , fix it ! But do it for YOU and only YOU!!!!!!!!! I'm so happy with my results (the left are my natural boobs, they were extremely uneven and sagged , the right is after my augmentation and lift with dr niccole @cosmeticare_ )

000000
Popular comments
Bloody awful.... women want lips as big as their breasts.. I like natural women ..yes without the augmentation still bigger (natural) is better but only in breast and inheritance.. if something else ..forget it
tonyw247
21 August 2019, 11:29 GMT
000000
A brain implant would help that.
stevenrobertchurchill
21 August 2019, 16:08 GMT
000000
Newsfeed
0
New firstOld first
loader
LIVE
Заголовок открываемого материала
Access to the chat has been blocked for violating the rules . You will be able to participate again through:∞. If you do not agree with the blocking, please use the feedback form
The discussion is closed. You can participate in the discussion within 24 hours after the publication of the article.
To participate in the discussion
log in or register
loader
Chats
Заголовок открываемого материала
Worldwide
InternationalEnglishEnglishMundoEspañolSpanish
Europe
DeutschlandDeutschGermanFranceFrançaisFrenchΕλλάδαΕλληνικάGreekItaliaItalianoItalianČeská republikaČeštinaCzechPolskaPolskiPolishСрбиjаСрпскиSerbianLatvijaLatviešuLatvianLietuvaLietuviųLithuanianMoldovaMoldoveneascăMoldavianБеларусьБеларускiBelarusian
Transcaucasia
ԱրմենիաՀայերենArmenianАҧсныАҧсышәалаAbkhazХуссар ИрыстонИронауОssetianსაქართველოქართულიGeorgianAzərbaycanАzərbaycancaAzerbaijani
Middle East
Sputnik عربيArabicArabicTürkiyeTürkçeTurkishSputnik ایرانPersianPersianSputnik افغانستانDariDari
Central Asia
ҚазақстанҚазақ тіліKazakhКыргызстанКыргызчаKyrgyzOʻzbekistonЎзбекчаUzbekТоҷикистонТоҷикӣTajik
East & Southeast Asia
Việt NamTiếng ViệtVietnamese日本日本語Japanese中国中文Chinese
South America
BrasilPortuguêsPortuguese
NewsfeedBreaking
02:16 GMTIsrael Going Further With Construction of Over 1,300 Housing Units in West Bank
01:15 GMTPandemic Will End When World Chooses to End It, WHO Chief Says
YesterdayJamie Lynn Spears Says Parents Pressured Her to Get an Abortion to Maintain Her Career
YesterdayFriends Alum James Michael Tyler Dead After Battle With Prostate Cancer Battle
YesterdayMeghan McCain Thanks Trump for Publicity After 45's Scathing Statement Against Her Late Father
YesterdaySmoke in the Cabin Forces American Airlines Flight to Make an Emergency Landing
YesterdayColombia Getting Ready to Extradite Most Wanted Drug Dealer Otoniel to US - Minister
YesterdayQatar Frustrated About Lack of Response From US to Request for Drone Sale - Reports
YesterdayMax Verstappen Wins US Formula One Grand Prix, Lewis Hamilton Finishes Second
YesterdayOld Trafford Has Fallen: Liverpool Desecrate Manchester United on Hallowed Ground
Yesterday'Cyclone Bomb': Weather Forecasters Say US West Coast Should Brace For Huge Subzero Storm
YesterdayTehran Vows Israel Will Suffer 'Thousands of Billions' of Dollars in Damage if It Dares Attack Iran
Yesterday'Greedy, Extremely Selfish' Mo Salah Branded 'Best Player in the World This Season'
YesterdayBiden Administration Reportedly Set to Roll Out Tax Targeting 0.0002% Wealthiest Americans
YesterdayPolice Presence in Nottingham Bolstered Following Wave of Spiking Reports, Says Media
YesterdayLiverpool Beats Manchester United 5:0 in Premier League
Yesterday'Extremely Concerning': China-Bhutan MoU Could 'Spell Disaster' For India, Warns Congress Party
Yesterday'What's He Trying to Say?': Snowden's Tweet in Russian With Soviet Poster Puzzles Netizens
YesterdayWatch Syrian Troops Block US Military Convoy, Force It to Turn Around
YesterdayEd Sheeran Tests Positive for COVID, Will Do Planned Performances From Home