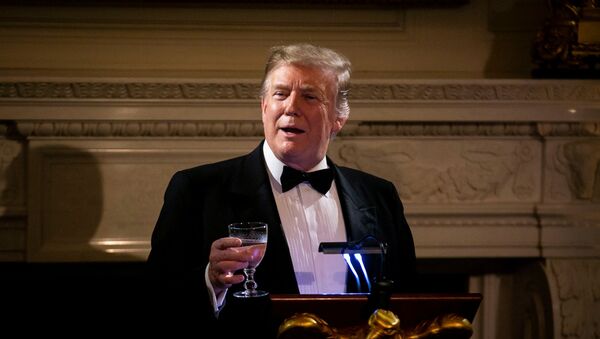 © REUTERS / Alexander Drago
Subscribe
International
India
Africa
US President Trump has been placing sanctions on Chinese goods and technology purchases in a trade war in an attempt to rebalance trade relations, in which he has accused China of "cheating".

President Donald Trump rebuffed accusations that his trade war on China will plunge the US and the global economy into a recession, declaring that he is “the chosen one” to challenge decades of trade 'cheating' from Beijing.

While speaking to reporters outside the White House, President Trump argued that putting increased pressure on China was simply him cleaning up messes left by his predecessors.

“Somebody said this is Trump’s trade war. It’s not my trade war. This is a trade war that should have taken place a long time ago by a lot of other presidents,” Trump said, criticising former Presidents Clinton, Bush and Obama.

“Somebody had to do it. I am the chosen one,” Trump continued, while looking away.

The President's statements come as the US experiences some alarming economic fluctuations.

The recent collapse of the stock market by 800 points, uncertain relations with the EU and UK, increasingly restricted market access to China are all signals of a potential looming economic crisis despite record growth rates in recent years.

National economists from various persuasions are predicting a likely recession by at least the end of 2020, partly caused by increased prices and uncertainty resulting from Trump’s international trade disputes.

While another recession could see massive job losses, increased poverty, and wage stagnation, a total economic collapse is not necessary for Trump to become concerned.

Even an economic slowdown or retraction could lead to major trouble for the president, who is facing re-election next year.

Trump has been criticizing the Federal Reserve for raising interest rates and being responsible for the slowing of the economy.