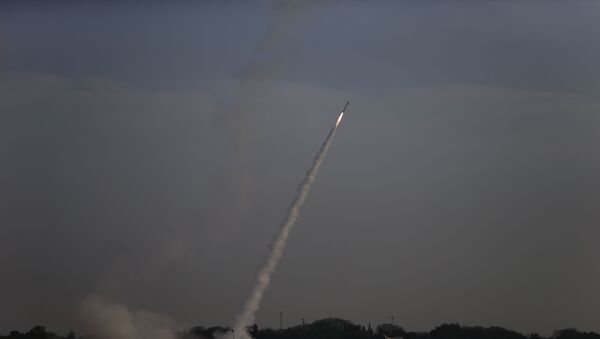 The Israel Defense Forces (IDF) fired a number of rockets toward the northern Gaza Strip early on Thursday and reportedly struck multiple military targets in a naval facility belonging to Hamas.

Gazans uploaded videos of the attacks onto social media.

​According to a tweet from the IDF, the move came in response to a rocket that was fired from Gaza toward Israel late Wednesday night.

In response to the rocket fired from #Gaza to #Israel, we just struck a number of military targets in a Hamas naval facility in the northern Gaza Strip.

The Israeli military group said that the missile launched on the night of August 21 was the fifth missile to come from Gaza in the past six days.

Moments after the IDF's strike on the strip, the group reported yet another rocket was fired from Gaza toward Israel.

1:00AM:
A second rocket was just fired from #Gaza to #Israel.

No injuries or deaths have been reported from either of the Thursday morning rocket launches.

This all comes hours after the IDF announced they had fired on a civilian aircraft mistaken for a Syrian plane that could "pose a real threat."

According to the Jerusalem Post, the Israeli military group considers Hamas responsible for the disruption on and around the Gaza Strip.