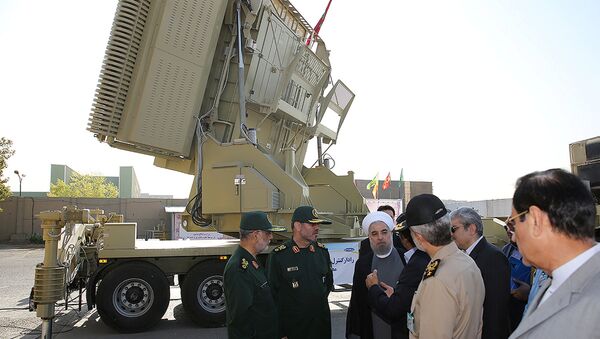 © REUTERS / President.ir
Subscribe
The Iranian military promised to formally unveil the advanced air defence system, which has been undergoing testing since 2017, later this week; the defence industry started work on the project in 2010 as a result of UN Security Council sanctions against the country over its alleged nuclear programme.

Iranian media have revealed the first footage of the operation of the Bavar 373, a mobile air defence system with a reported maximum range of 200 km, the ability to launch a variety of missile types, and a flight ceiling of up to 27 km. The new system is said to be capable of neutralising both conventional aerial targets such as aircraft and drones, as well as high-speed ballistic missiles.

#BREAKING: First video of Bavar-373 SAM System which is using Sayyad-4 surface to air missile was released by state media of #Iran's Islamic Regime today. It will be unveiled by #Iran's Ministry of Defense on 22 August. It is claimed that the Sayyad-4's maximum range is 200km. pic.twitter.com/A4iDsdb8L3

The video, showing footage of the system’s phased array radar and launch erector platform in operation, along with launch footage at a test range, shows the system in at least two configurations, including a launcher in x2 and x4 missile mode, with missile containers shaped in a ribbed rectangular design similar to that of the US Patriot missile system.

The new air defence system is set to see an official roll-out on Thursday as part of the country's Defence Industry Day ceremonies. Last week, Iran’s defence ministry announced that the Bavar 373 was already prepared to be sent to the armed forces.

Iranian engineers began working on the Bavar 373 in 2010, after Russian President Dmitry Medvedev suspended a $900 million deal signed in 2007 on the sale of the S-300 air defence system to Iran due to Moscow’s adoption of UN Security Council sanctions against the country over its alleged nuclear programme. Russia eventually made good on the deliveries in 2016, delivering four batteries of the S-300PMU2, an upgraded version of the weapons system made for export. Iran, however, simultaneously continued development of the Bavar 373, with testing of the system beginning in 2017.

Iran has unveiled a broad range of missile, drone and air defence systems and other equipment in recent months amid the escalation of tensions in the region following the deployment of a US carrier group in the Middle East, and the series of tanker ‘sabotage attacks’, ship seizures and drone shootdowns which followed.

Last week, Iranian Rear Admiral Amir Rastegari, chief of the Iranian Defence Ministry’s Marine Industries Organisation, said that Iran’s successful efforts to assure self-sufficiency in the defence sphere, and not the “kindness” of its adversaries, could be credited for the changing rhetoric and caution shown by the US and its allies in relation to Iran.

000000
Popular comments
Soon this Bavar system will be installed on war ships...
netman
21 August 2019, 16:51 GMT5
000000
Likely a mere half generation off the latest S-350V Russian system just released perhaps comparable in a number of aspects congratulations to Iran for this peacemaker produced under harsh sanction conditions im sure Russia shared a fair bit of technology of its S300 variants. Kudos to both ✌