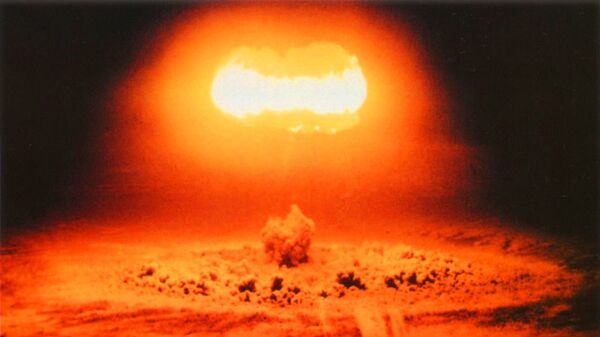 Tokyo’s 2019 defense white paper calls attention to North Korea successfully miniaturizing a nuclear warhead. While the inclusion reflects increasing Japanese anxieties, it’s likely an attempt to pressure the US into resuming talks with Pyongyang, since Tokyo’s own bilateral summit attempts have so far failed.

Unnamed sources told the Yomiuri Shimbun newspaper Wednesday that in unreleased white paper on defense, the Japanese government has concluded that the ability of the Democratic People’s Republic of Korea (DPRK) to miniaturize a nuclear warhead poses a “serious and imminent threat” to the country.

However, it’s not the first time the claim has been made. As early as March 2016, Pyongyang published photos of State Affairs Commission chair Kim Jong Un standing next to a metallic sphere roughly the size of a large beach ball, which Rodong Sinmun claimed was a miniaturized nuclear warhead.

While the Pentagon dismissed their claims at the time, the following year, the Defense Intelligence Agency (DIA) concluded the DPRK had done just that.

“The IC [intelligence community] assesses North Korea has produced nuclear weapons for ballistic missile delivery, to include delivery by ICBM-class missiles,” said a part of the classified assessment that was read to the Washington Post in August 2017. The report also found that the socialist country possessed as many as 60 nuclear warheads, although it didn’t say how many the DIA thought were miniaturized.

It’s unknown if the report links the smaller warheads to the short-range ballistic missiles tested by the DPRK in recent months.

So if everybody already knew about North Korea’s missile-capable nukes, why the hubbub?

“It is Japan that is most threatened, and probably the primary target of such a capability,” Vipin Narang, a nuclear affairs expert at the Massachusetts Institute of Technology, told Reuters Wednesday. “So openly acknowledging it underscores Tokyo’s acute fears that North Korea’s nuclear program continues to grow unabated with no foreseeable plan to slow its growth, let alone eliminate them.”

Denuclearization talks began in June 2018 between the United States and the DPRK, with Kim and US President Donald Trump leaving the Singapore summit with promises to move toward ending the military standoff on the peninsula that’s lasted since a tentative ceasefire was signed in 1953. A second round of talks in Hanoi this past February fell apart, however, as each side proved unwilling to budge until the other side gave more concessions.

However, Japan hasn’t been a part of these talks, and in light of the failure of Washington to deliver, Japanese Prime Minister Shinzo Abe has begun shifting his stance toward Pyongyang in the interests of addressing the DPRK himself.

Just weeks after the Hanoi summit, Japan stepped back from a European Union motion presented to the UN Human Rights Council in March that condemned North Korea’s human rights record - the first time in a decade it didn’t back such a statement. Chief Cabinet Secretary Yoshihide Suga told Kyodo that Tokyo had “reached this decision based on a comprehensive examination of the outcome” of the Hanoi summit.

Then in May, the island nation dropped several provocative statements aimed at the DPRK from its annual Diplomatic Bluebook, from claiming ownership of several contended islands in the Sea of Japan to a pledge by Tokyo to work with its allies “to maximize pressure on North Korea by all available means.”

Abe then told reporters on May 6 that he was willing to “meet face-to-face with Chairman Kim Jong Un, and meet with him without attaching any conditions,” indicating his primary concern, alongside peace, was the repatriation of the remaining Japanese citizens abducted in North Korea in the late 1970s and early 1980s. As many as 17 people are alleged to have been abducted between 1977 and 1983, although it’s unclear why or by whom.

In 2002, then-leader Kim Jong Il told then-Japanese Prime Minister Junichiro Koizumi that only 13 had been abducted and eight of them had died by then, permitting the remaining five to return to Japan and washing his hands of the issue. However, Tokyo has rejected proof of the eight deaths, and the issue of winning the return of any remaining abductees has formed the center of Japanese relations with the DPRK.

However, it’s been an uphill struggle for Japan and the DPRK to come to terms. The entire Korean Peninsula was a Japanese client state or outright colony between 1876 and 1945, and the years of brutal imperial rule have left a stain on relations between Japan and both Korean states.

Tokyo “must not dream of dealing with” North Korea without making “full reparation for its past crimes,” Rodong Sinmun, the newspaper of North Korea’s ruling Korean Workers Party, wrote in March 2019. Pyongyang also prodded Tokyo during the Hanoi talks for using US diplomats as interlocutors for their own concerns with regards to DPRK relations - a possible reason Abe hopes to speak directly with them now.

Abe reaffirmed his commitment to meeting with Kim late last month, following a set of missile tests by the North.

However, Abe is hardly a man of peace. During his administration, he’s taken unprecedented steps to expand the country’s defense spending, including a controversial retrofitting of the Self Defense Force’s Izumo-class multipurpose destroyers to carry F-35B stealth aircraft, and attempting to remove the country’s pacifist clause from its constitution.

Now, US Special Envoy to North Korea Stephen Biegun has returned to Seoul to meet with South Korean - and hopefully North Korean - officials, “as soon as we hear from our counterparts.” However, with Pyongyang still furious over South Korea’s participation in war games it had previously promised to shun, it’s unclear if Washington’s latest attempt to kickstart negotiations will be successful.