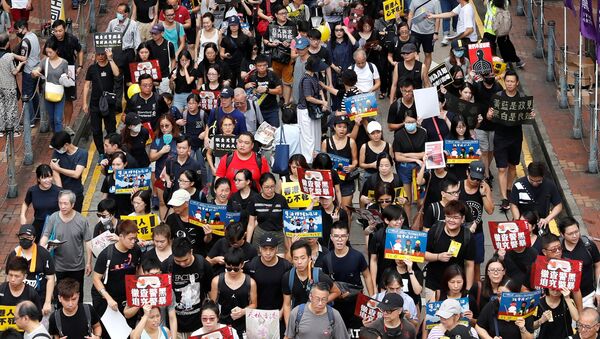 Well over a million people participated in anti-extradition protests over the weekend, making Hong Kong a lightning rod for media. However, with the city government’s rhetoric and the overexposure of clashes, the reality of the average protester’s economic grievances and peaceful conduct have been crowded out of media coverage along the way.

An estimated 1.7 million peaceful anti-extradition protesters took to the streets of Hong Kong on Sunday, and despite their massive numbers, reports out of the semi-autonomous city said demonstrators were met with little police resistance and even disposed of others’ litter while telling journalists to go home and “not stage riots.”

“People will not have any violence. The only main source of violence is from the police, it’s not from the protesters,” a protester named Nicole told Sputnik during a demonstration over the weekend.

In addition to protester accounts, Sputnik field reporter Bob Schlehuber was able to form his own opinion about the Hong Kong anti-extradition demonstrations by visiting the semi-autonomous city. After a weekend of protests, Schlehuber phoned into Radio Sputnik’s By Any Means Necessary on Monday to discuss what those taking to the streets are most concerned about and shed light on what the mainstream, Western media is failing to report.

“A lot of the grievances people have there … are economic, based around the capitalist systems that the city has been exposed to. You have 8% of the populace here in Hong Kong [that] are millionaires, but if you walk around, you do see quite a few blue collar workers; you see Filipino and Malaysian migrant workers in the city sitting outside on cardboard boxes, waiting for work to be given to them,” Schlehuber told hosts Eugene Puryear and Sean Blackmon.

“Housing prices have skyrocketed, but yet again you’ll see luxury apartments and skyscrapers throughout the city, so a lot of those issues haven’t been addressed, and in a city that’s heavily reliant on financial capital, not much is gonna change, especially when the United States and Indonesia and Australia [continue trading with Hong Kong].”

Schlehuber also explained that it’s important for those who are following Western media’s coverage to know that “pro-democracy” demonstrators are not waving American flags en masse or using the US national anthem as their protest song.

“It’s amazing how the Western media has taken … one British flag and one American flag of the, say, a million people at the protest, and they basically made it a rallying call that Chinese citizens and Hong Kongers are turning to the West for guidance and leadership on how democracy and freedom can actually operate,” he said.

While the West is focusing on an American flag and a false narrative of the anti-extradition protests in Hong Kong, they are ignoring the fact that most of the demonstrations are peaceful. Not only that, but it is those same protesters who are coming to the aid of law enforcement in some cases.

Schlehuber recounted that at one point, a group of protesters were passing by police barracks and a government building, and a few began to shine green lasers to cause disruption and distraction - a tactic utilized by both demonstrators versus police and police against reporters.

Rather than assist in the provocation, it was “other protesters in the march [who] quickly shoved them and pushed them along, demanding and yelling for them to stop,” he said.

The media’s reporting of Hong Kong demonstrations, combined with Beijing and Hong Kong Chief Executive Carrie Lam’s one-sided concentration on protesters’ actions during clashes, have left some anti-extradition demonstrators skeptical of the leader’s call for dialogue.

Nevertheless, Lam announced at a Tuesday morning news conference that “work will start immediately to build a platform of dialogue” and that she hopes “this dialogue can be built upon a basis of mutual understanding and respect to find a way out for Hong Kong,” according to The Guardian.