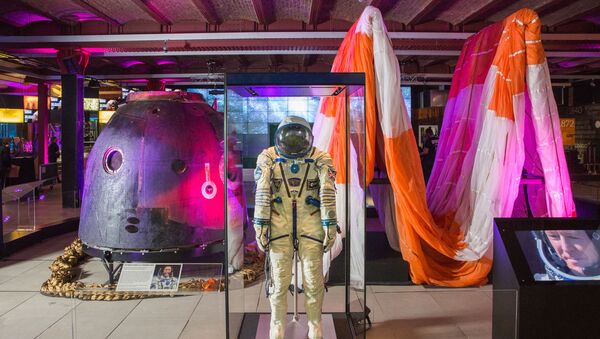 Demond Cureton
All materialsWrite to the author
The event is home to numerous items from the Space Race, featuring items never curated before and has seen over 1.3m visitors in attendance during its nearly 20-month tour across the UK.

London’s Science Museum, along with South Korean tech giant Samsung, is hosting its groundbreaking Summer of Space programme, with a number of stellar relics on display such as the famous British cosmonaut’s Soyuz TMA-19M, flown during his Principia Mission to the International Space Station (ISS) and back.

The exhibition, which will last until late September, reveals the Space Race between the United States and Soviet Union (USSR), which made space not only a frontier of intense technological competition, but also collaboration between the two superpowers.

UK culture secretary, Jeremy Wright, said that the record numbers of people visiting Mr Peake’s spacecraft highlighted how “science and space travel continue to inspire us”, adding that the successful tour underlined why the UK made its “world-class culture accessible to everyone in all corners of the country”.

According to Science Museum Group director, Sir Ian Blatchford, the tour was a “testament to the power of culture to inspire” and that with “Russian, European and UK space ingenuity” contributing to Mr Peake’s successful mission, the “importance of international collaboration in achieving progress” was “more starkly obvious than ever”.

Mr Tim Peake, who made the journey, also added that he was “incredibly proud” of the 1.3m visitors from across the UK who had the chance to “get up close” to his Soyuz spacecraft, adding that it was “wonderful” how the exhibition was working together to “extend the Principa Mission’s impact in inspiring the next generation of scientists and engineers”.

Ms Jump said that the MML had been approached by the Science Museum to join the event to highlight “the Soviet Union and the Space Race for their ‘Lates’ programme”.

The Library has also been collecting materials on Marxism for over 85 years and is home to over 60,000 volumes as well as major archive collections on the Soviet Union, Spanish Civil War, revolutionary poster art and postwar peace movement, among others, Ms Jump said, adding that the Library provides educational resources and syllabi to national trade unions.

"We have a rich collection of printed material relating to the Soviet Union’s space programme,” Ms Jump said. “Many of our pamphlets, produced by Novosti, are visually striking and evoke the contemporary spirit of technical innovation, scientific ambition and an optimistic vision of a future shaped by collective human endeavour.”

Whilst visiting the library, people also had “very little awareness of the pioneering nature of Soviet Space exploration” and some school groups had visited before and recited that America ‘won the space race’, Ms Jump added.

“Even in this post-cold war age, the Soviet achievements often get forgotten,” she said, adding that stories “of the first woman in space [Russian cosmonaut Valentina Tereshkova], are evocative and inspiring, and have the potential to reach wide audiences, as well as the first artificial satellite, the Sputnik I."

Margarita Goroskhevich, founder of Allriot Clothing, said that the Soviet Union's legacy in international space exploration was "the real first step for man" and that Russian scientific contributions are "still being used to this very day".

"We cannot forget that it was the Soviets who were the first to explore space and launch satellites into orbit", Ms Goroskhevich said. "If it wasn't for them, other international programmes wouldn't have the technologies they needed to safely bring astronauts to and from the ISS or set foot on the moon".

She added that the Soviet Union had initially launched its space programme for "peaceful purposes" and that "brave people like Yuri Gagarin and Valentina Tereshkova" had risked their lives in the name of "progressing humanity".

"I have been designing my Retro Reds lineup of tees for a few years now so that I could help others remember Soviet contributions to space exploration, and people have fallen in love with the designs and propaganda art from the USSR," she added.

The 1.5 tonne Soyuz capsule, widely seen as the only means of ferrying humans to and from the ISS, transported Russian commander Yuri Malenchenko, American flight engineer Tim Kopra and British flight engineer Tim Peak from the UK on 15 December 2015 to the ISS and returned them to the Kazakhstan steppes on 18 June 2016.

The "Charlie Brown" Apollo 10 command module simulator console, designed by the North American Rockwell Corporation, is the world's fastest manned vehicle, which reached speeds of 39,897 km/h as it returned to Earth on 26 May 1969. The mission would be a 'dress rehearsal' for the moon landing in July 1969, where US commander Neil Armstrong and lunar module pilot Buzz Aldrin would make the unprecedented trip to the Moon. A replica of the Apollo 11 'Eagle' lunar landing module is also curated with the Apollo 10 module.

Other events featured at the exhibition include a ‘Space Descent’ virtual reality (VR) simulation of Mr Peake's descent from the International Space Station, narrated by the British astronaut, as well as an ‘Apollo Astronights’ sleepover where visitors can attend a lunar rover workshop, among others, lectures from the scientific community, a selection of films, as well as the chance to try on a replica spacesuit worn by Apollo astronauts.