'Who's The Smart One?': Mayweather Brags About Making Millions on Video That Fooled His Fans 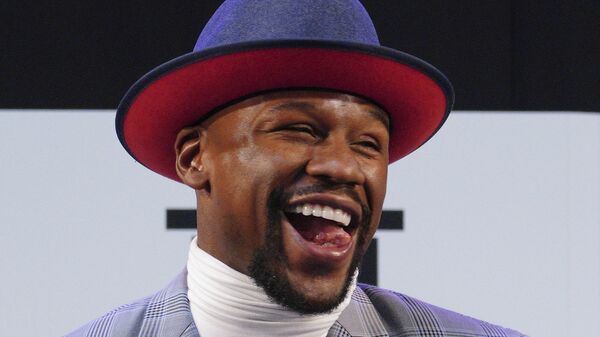 Tim Korso
All materials
A recently resurfaced video once again spurred the hopes of boxing fans eager to see Mayweather and another famous boxer, Manny Pacquiao, in the ring.

Undefeated boxing champion in several weight categories, Floyd Mayweather Jr. revealed on his Instagram that the video where he mulls a possible rematch against another famous boxer, Manny Pacquiao, was not only shot months ago, but is also misleading since he never intended to organise the fight.

There is a video circulating that I made 8 months ago about a “MAYWEATHER - PACQUIAO” REMATCH. I got paid $2,200,000 to make the video. The truth is, the fight will never happen again. Now, swipe left and look at the money that got wired to me for the video. Now, who’s the smart one ? I’m making millions just for 10 second video drops.💲💲💲🏦💰💸

Mayweather explained that he participated in the video only for money and boasted about the receipts from his bank account, showing that he made some $2.200.000 from the deal. He also showed a screenshot from the chat, where he negotiated the deal.

"Now, who’s the smart one? I’m making millions just for 10 second video drops", the boxing star wrote on his Instagram.

Mayweather fought Manny Pacquiao, who held championship titles in four different weight classes and won 62 fights, on 2 May 2015, winning the fight by unanimous decision of the judges. The fight was a major disappointment for Pacquiao's fans and they, along with Mayweather's fans, long cherished hopes that the two boxers, now retired, will meet again in the ring.

Floyd Mayweather won 50 professional boxing fights without ever losing or finishing one with a draw, acquiring championship titles in five weight classes from super featherweight to light middleweight. But he is known not only for his supreme fighting skills, but also for boasting and throwing his money, sometimes literally.