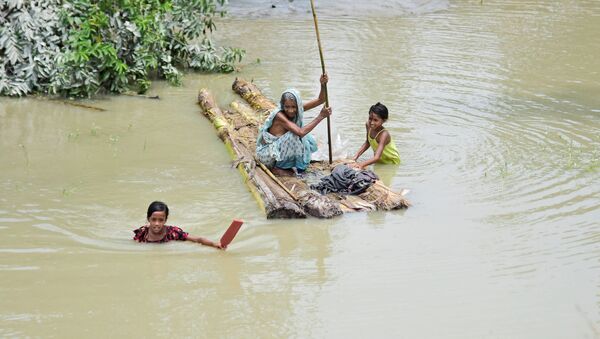 New Delhi (Sputnik): With heavy downpour battering several parts of northern India in the last few days, as many as 58 people have died, forcing the authorities to issue a flood alert on Tuesday. Also, over 10,000 people have been evacuated in India’s national capital as a precautionary step.

Heavy rainfall and floodwaters have affected normal life in India’s national capital New Delhi and in the states of Himachal Pradesh, Haryana, Jammu and Kashmir, Punjab, and Uttarakhand.

The alert was issued due to river water in these states going above the danger mark following heavy and unrelenting rainfall over the last few days.

In Delhi, more than 10,000 people have been evacuated from low-lying areas after the River Yamuna, which flows along the city’s outskirts, crossed the danger mark.

The water had risen to over 206 metres on Tuesday, half a notch above the danger mark of 205.33 metres, a Delhi city government official told the News18 web portal.

As many 30 boats have been kept ready by the city administration in Delhi to prevent accidental drowning, the official said, adding that the water level is expected to rise further after 143,000 cusecs of water were released on Monday evening by the neighbouring state of Haryana.

Many tourists and residents are stranded in other parts of northern India, although various agencies, such as the Indian Air Force (IAF) and the National Disaster Response Force (NDRF), are involved in rescue operations in many places.

So grim is the situation that it took three days to airlift the agriculture minister of Himachal Pradesh, R.L. Markanda; however, 127 more people remained stuck due to heavy rains and snowfall, ANI news agency reported.

Netizens have expressed their alarm and concern over the evolving natural catastrophe. Some have called on the administration to step up rescue and relief efforts.

One of my Indian friend had sent this to me. He lives in Indian Punjab. His area is full of flood since yesterday.#Floods2019 pic.twitter.com/oDdIbghOGQ

Heart goes out to those affected by #Floods in various parts of the country.
Kudos to Administration; armed & paramilitary forces; NGOs & people striving to save lives & ensure safety of all.
Urging everyone to collectively rise and support in every possible way. #Floods2019

Entire year we play with nature but we need to understand that if nature decides to play with us then there will be no life.#Floods2019

Are the disaster warnings neglected? Do the authorities deliberately fail consecutively in the prevention of destruction of lives and infrastructure by floods? #Floods2019

Salute to this man's resolve and confidence 🙏
Lost everything in floods but still believes can stitch #life again.#Floods2019#MaharashtraFloods#WorldPhotographyDay pic.twitter.com/5sCnbcuV8i

We can do lot of things if we have money.. but we must be have a good heart and mind to serve the people...#Floods2019

​On Monday, Indian Air Force helicopters carried out rescue operations in the Jammu area in Jammu and Kashmir and the Karnal area in Haryana state.

The Punjab state government, meanwhile, has declared the current flood situation in villages a “natural calamity”. The state's chief minister, Captain (Retd.) Amarinder Singh, has announced an emergency financial package of over $139,000 for the affected regions.

In Himachal Pradesh, schools and community centres in nine of the state's 12 districts have been closed.

In Uttar Pradesh state, rivers, including the Ganges, Yamuna, and Ghaghra, remain in spate due to the heavy rains in neighbouring states.

In southern India, floodwaters have ravaged the states of Kerala, Karnataka and Andhra Pradesh over the past three weeks. More than 160 people have died in that part of the country during this period.