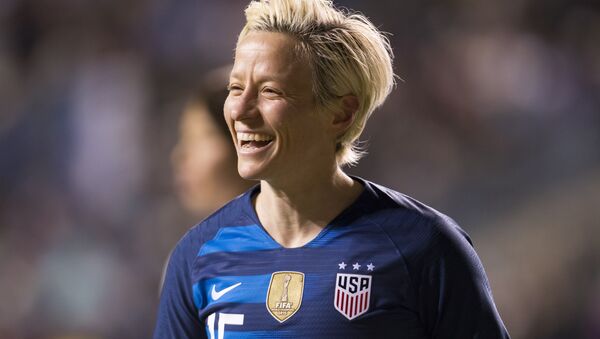 © AP Photo / Chris Szagola
Subscribe
Megan Rapinoe, attacking midfielder on the US women’s football team, found herself embroiled in a row with US President Donald Trump after footage shot earlier this year emerged showing her saying: “I’m not going to the f***ing White House", when asked if she would visit should her team win the World Cup.

Megan Rapinoe, co-captain of the US women’s football team and an outspoken critic of the US president, has shared in an interview with The Guardian that her father almost certainly voted for Donald Trump.

When opening up on her relationship with her parents, she said:

“I’m very similar to how they are, even though I think my dad voted for Trump and I’ll say: 'I don’t get it. How are you simultaneously as proud as punch of me, and watching Fox News all the time, [who are doing] takedowns of your daughter'".

Two weeks after the US women’s football team celebrated their World Cup victory, the squad's attacking midfielder went on to say that she’s advised her parents to seek therapy, admitting to a spate of heated arguments over the years.

Despite this, Rapinoe is still very close to her family:

“I talk to my parents all the time, every day. And I feel like I have seen progress and growth. I would love it if people understood you should never say racist things and be OK with gay people, or whatever it is. But, obviously, it doesn’t happen that quickly", said Rapinoe.

“It’s heartening to learn that people with political differences can still remain close, even if things become strained at times. A lesson for us all".

The 33-year-old who won the Golden Boot at the World Cup tournament in France, found herself caught in a row with Donald Trump after footage shot earlier emerged of her saying: “I’m not going to the f***ing White House", when she was asked whether she would go there if her team celebrated victory at the World Cup. Rapinoe had urged her US teammates to “think hard” about associating themselves with the US president. 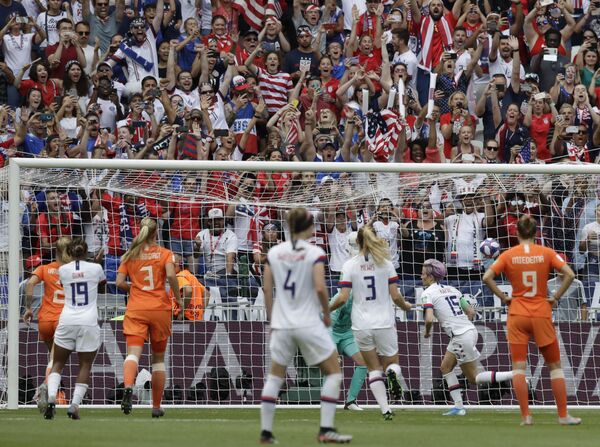 United States' Megan Rapinoe, 2nd right, celebrates with teammates after scoring her side's opening goal during the Women's World Cup final soccer match between US and The Netherlands at the Stade de Lyon in Decines
© AP Photo / Alessandra Tarantino

Rapinoe, who is gay, earlier lashed out at Trump, claiming him to be sexist and misogynistic, and describing herself as “a walking protest”.
She became one of the first athletes to join then-NFL player Colin Kaepernick’s protest against alleged police brutality by kneeling during the US national anthem.
Twitter users opinions were split on the athlete’s opening up regarding her father’s possible political preferences, saying:

Megan Rapinoe has revealed that her dad voted for Donald Trump and people are shocked https://t.co/q1vnqnXNt9

Petulant child. I suspect many of her young comrades are too.

She is another example of a child lecturing her parents on what is best for them. An ungrateful teen girl.

At least 2 people in her family have a brain

​Some rushed to note that her dad had done nothing illegal, saying it's okay to vote for who you want.

Her Dad did nothing illegal. It's okay to vote for who you want.

​Others wrote sarcastically "How dare they have a different opinion?"

My mother is a raging liberal and I love her dearly. Maybe YOU need therapy Ms Rapinoe