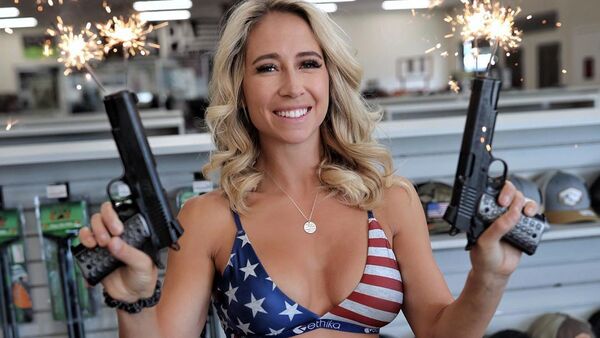 Utah-based Casey Currey has garnered over 300,000 followers on Instagram, describing her account as “Guns, Buns and Shenanigans”. On her page, idyllic family pictures and gym videos are posted alongside Lara Croft-style bikini snaps in which the blogger holds guns of all kinds.

Instagrammer Casey Currey, who calls herself a home-grown American woman, has denied that there is a gun problem in the US, noting that the main focus should be on battling mental illness. The 27-year-old has gained a 329k-strong following on her account, under the handle buff_cookie, on which she demonstrates top-notch physical shape as well as a love for dogs and all kinds of weapons, ranging from machine guns to pistols.

Let Freedom Ring 🇺🇸 I’m so grateful today and every day to live in this great nation under God. May we always remember how truly blessed we are. #happybirthdayamerica #starsandstripesforever

While some seemed to enjoy her combined image of a strong female warrior and caring mom and wife, others mocked the gun-loving blogger.

“You look so cool holding that gun. Are you thinking about a mass murder?” one of the commenters posted.

In her turn, Currey, whose family happens to run a gun shop, argued that weapons give her a feeling of protection and insisted that she has taught her children about safety.

“I like the comfort of knowing that if something happens we can protect ourselves. Fear comes from the unknown. Firearms and firearm safety are very well known in our family. They know they are not a toy and are to be taken very seriously”, she said, as cited by the Daily Star.

She also dismissed any connection between the crime rate and selling firearms.

“Crime rates are similar. Bad people will do bad things regardless. A firearm is simply a tool, and if they want to find a way to inflict harm they will. We don’t have a gun problem in our country, we have a mental illness problem. That should be our main focus”, she insisted.

As for school shootings, she argued that arming teachers would solve the problem and avert future tragedies. She pointed out that educators should be specifically trained for this purpose.

“However if something ever happens in my kids’ school I sure hope their teachers care enough to arm their classrooms”, she told the British outlet.