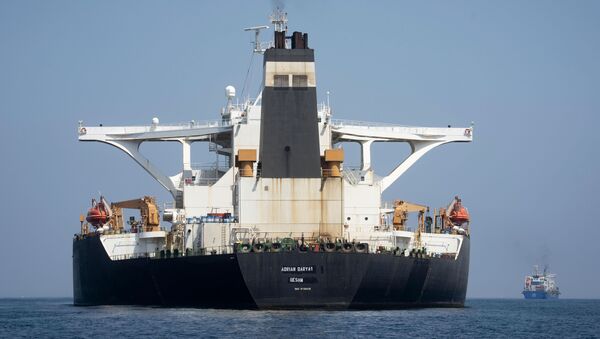 © AP Photo / Marcos Moreno
Subscribe
Iran confirmed on Sunday that the Grace 1 oil tanker renamed Adrian Darya had set course for international waters following its release. On Saturday, the US Department of Justice sought to seize the Iranian oil tanker Grace 1 issuing a corresponding warrant days after Gibraltar's authorities ordered the vessel to be released.

Addressing the issue of the release of UK tanker Stena Impero, Mousavi stated that Tehran is waiting for a court decision on the matter.

He stressed that the detention of Stena Impero was in no way linked to the incident with Iran's tanker in Gibraltar.

"If it [the United States] makes such a step, this will jeopardise the security of navigation in international waters. Iran has warned the US authorities, using official channels, specifically the Swiss Embassy in Tehran that this will have grave consequences", Mousavi said, when asked about the possible seizure of the tanker by Washington.

He also stressed that Washington's request to Gibraltar authorities to extend the detention of the vessel was illegal.

The Iranian oil vessel Adrian Darya formerly known as the Grace 1 took to the open sea after 46 days in Gibraltar's waters.

On Saturday, the US Department of Justice issued a warrant to seize the Grace 1. According to the US Department of Justice, a court ruled that the oil tanker, its cargo and $995,000 in cash are subject to confiscation over the violation of a number of US laws on bank fraud and money laundering, as well as the International Emergency Economic Powers Act (IEEPA) and the law on confiscation for terrorism-related activities. Gibraltar’s authorities, however, rejected the US request to extend the seizure of the tanker, citing differences in US and European sanctions against Iran.

Gibraltar authorities, assisted by UK marines, arrested the tanker off the coast of Gibraltar on 4 July claiming that the ship had breached EU sanctions by allegedly transporting oil to Syria. Iran denied the allegations.

Relations between Washington and Tehran have soured since the 2018 US withdrawal from the 2015 Joint Comprehensive Plan of Action (JCPOA), commonly known as the Iran nuclear deal, with the US subsequently re-imposing sanctions on the Middle Eastern nation.

The move was followed by an escalation of tensions in the Persian Gulf in which several tankers were attacked, prompting the United States to increase its military presence in the region. Iran later downed a US drone over the coastal area of Hormozgan, purportedly in its territorial waters, prompting threats by the United States.

000000
Popular comments
Funny how Yankistan has now been forced to reveal that they've been behind the capture of the Grace 1 all along. Remember when Pompeo feigned indifference regarding the vessel's seizure and claimed that any possible ramifications were the sole problem of their British poodles? Anyone with a brain could see through those Anglo-Saxons' and "Israel's" clumsy plot to draw the EU, especially Germany and France, into their intended criminal assault on Iran, since they're too coward, weak and bankrupt to handle an ensuing invasion and attempted occupation alone. Now that Yankistan and Little Britain are on their own, the world can see how powerless both of these yapping mutts have become.