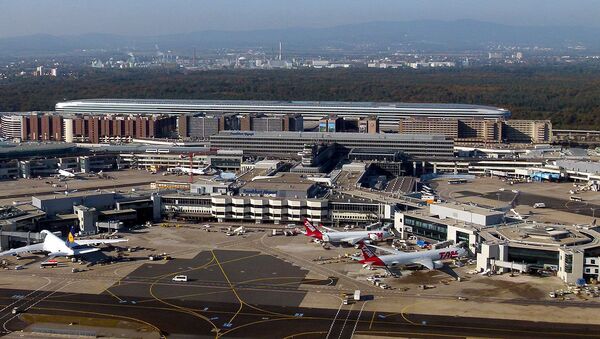 Despite incidents with drones at London’s Gatwick Airport and Frankfurt Airport, Germany has no large-scale control or defence system to deal with flying “intruders”, which also could be used by terrorists to carry small explosive devices, as security services warn.

The German Transportation Ministry has tasked the country’s Air Traffic Control (DFS) authorities to work out an action plan to protect airports from drones by 30 September, the outlet Sueddeutsche Zeitung reported on Monday. The governmental body, responsible for monitoring airspace for commercial aviation, is to ensure that airports have "systematic drone detection".

"According to the Transportation Ministry, operating unmanned flying systems near airports poses a considerable risk to the safety of flights”, the DFS told the outlet.

Its spokesman explained that the key factors are "the increasing number of drone sightings in close vicinity to airports" and "recent events when unmanned aerial systems temporarily halted traffic at airports”. The topic is expected to be discussed during the national meeting of the aviation industry, attended by German Chancellor Angela Merkel (CDU).

Germany already has regulations affecting the use of drones. They are not allowed to fly closer than one and a half kilometres to airports as well as over main roads, public buildings, industrial facilities, prisons, military installations, or rescue operations.

Despite these limitations, the numbers of incidents with drones, which have posed a risk to air traffic, spiked in just one year. In 2018, there were 158 reports about aircraft pilots, who were disabled by a drone, which is 80 percent more than in 2017. As the outlet points out, the authorities’ hands are tied for several reasons. On the one hand, aircraft radars do not detect drones. On the other hand, even if such an object is spotted, it is hard to immediately find its owner as they have to identify themselves with a sticker on the device but there is no system for radio signal identification.

That is why one of the DFS’s tasks would be developing a new algorithm for monitoring drones and their registration, which is not yet been available on the market. According to experts, it might include new radar surveillance, frequency jammers that would force drones to twist off or sensors that would activate an alarm after receiving signals from the drone remote control. As Sueddeutsche Zeitung points out, security agencies already use similar technologies during state visits.

The authorities are looking into setting up an 18-kilometre zone around airports that could be monitored by air traffic control up to 1,300 metres high. According to the report, police would be responsible for getting drones down in critical situations. However, the question of who will pay for such missions is open as airports are not eager to be responsible for corridors, extending far beyond their territory.

Drones have paralysed the work of two major European airports over the past year. Just before Christmas, traffic at London's Gatwick Airport was halted for about 30 hours resulting in the cancellation of 1000 flights and stranding 140,000 passengers. In May, Frankfurt Airport experienced a similar shut down of a lesser scale, which lasted one hour, after at least one flying object was spotted there.